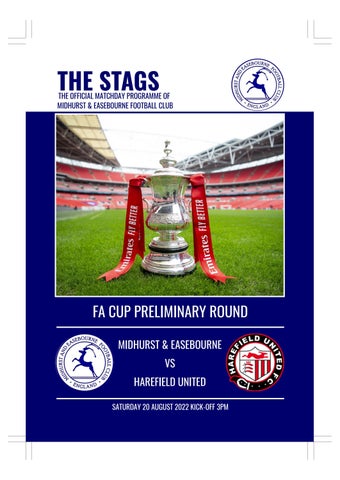 Good afternoon welcome back to The Rotherfield , which is an historic day for the football with us hosting our first ever Emirates FA Cup game. I’d like to welcome today’s visitors Harefield Town, their management team, committee members and supporters. Harefield play their football in the Combined Counties North Division. They were laterally moved this season after being in the Spartan South Midlands League. Like to extend my welcome to the match officials for todays game. This is a great opportunity for both clubs with prize money at stake. Plus the opportunity of playing a higher stepped club in the next round. Tuesday evening we suffered our first defeat of the season against a very good Horsham YMCA side. We’re take a lot of positives out of it, there’s things to work on for sure but competing with the big clubs in this league is good to see, shows we’re not millions of miles away, it’s just fine margins, we’re always learning as a management team like wise the players are as well. Over time this will stand us in good stead. Enjoy the game

Midhurst &amp; Easebourne 0 v 1 Horsham YMCA Stags suffered there first defeat of the season, in what was a great advert for the Southern Combination Premier Division. The opening 45 minutes was played at a good tempo without any real chances, the best opening was created by the visitors, Tom Tolfery found space with the striker dragging his shot wide. Stags were causing the visitors some problems with Billy Connor in particular down the Stags left. Stags did just lack the final ball at times. As half time approached there was little between the sides. Horsham YMCA started the second half really well. They had a period of sustained pressure. Stags keeper Josh Bird made a smart save from Josh Neathey. The visitors then hit the post with with a good strike from Dean Carden. In the 63rd minute the deadlock was broken Dan Evans clipped the ball to Neathey who’s clever footwork found him some space before eventually firing past Bird in the Stags goal. Stags responded well, with a few half chances, without really creating any clear openings. Stags boss Andy Ewen said ‘We have started life really well in the Premier Division, there’s definitely promise for an exciting season ahead. As a group we have taken a lot out of tonight’s game, lads have given me everything, we fell just short.’

The club was formed in 1868, making it the oldest club in Middlesex. In their formative years they played under such names as Harefield Victoria and Breakspear Institute in the local Uxbridge Leagues before merging with Harefield FC in 1934 to become Harefield United, playing in the Uxbridge and District League.

By 1947 the club had joined the Great Western Combination, playing at Taylors Meadow and winning the league once in the 1950-1 season. In 1964 the club moved to the Parthenon League, winning the league at the first attempt. They then joined the Middlesex League two seasons later where they stayed for five seasons, winning the league title four times and the league cup twice. In 1967-8 the club celebrated their centenary by moving to their present ground at Preston Park in Harefield, joining the Spartan League Senior Section in the 1971-2 season, staying there for four seasons, making their debut in the FA Vase in 1974-5 before progressing to Division Two of the Athenian League for the 1975-6 season. The club also made their debut in the FA Cup in 1979-80. The Athenian League folded in 1984, the year the Hares won the League Cup under manager Nobby Carpenter, making them still the current holders! The club then moved to the Isthmian League Division Two North for two seasons, then spent seven years in Division Two South before being relegated to Division Three where they stayed until after the 1996-7 season when lack of funds for ground improvements meant the club had to move back to the Spartan League. A year later they became founder members of the Spartan South Midlands Premier Division South, until it was renamed Division One where they finished runners up and won the League Cup, before playing in the Spartan Premier where they remained until being relegated to Division One at the end of 2015-6. This spell was the most successful in the club’s history winning the Challenge Trophy in 2002-3 and the Premier League Cup the following season when they were also runners up in the Middlesex Senior Charity Cup. Under manager Stuart Leavy the Hares were league runners up twice, in 2006-7 and again in 2008-9 when they missed out on promotion to the Ryman League by one goal difference to Biggleswade Town.

In 2002 Harefield United Youth FC was formed with teams from the former Denham Youth FC, the club currently fielding over twenty teams of all ages and levels from Under 7s to Under 21s, Sunday League teams, Under 18s Allied Counties, reserves and first team with some players having progressed all the way through the ranks. In 2010 the club won the National Award for Groundsman Of The Year for Steps 5 and 6, some achievement for a club with pitch maintained by volunteers. At the beginning of the 2016-7 season the Hares start life in the Spartan South Midlands League Division One looking to bounce back at the first attempt under manager Jason Shaw’s second season in charge. In season 2017-18 the Hares promoted reserve team coach Brian Keeley to Head of Youth Development with former first team player Ben Payne as his assistant, looking to expand the thriving youth programme further at Harefield.

In 2018 United celebrated their 150th year of football in Harefield as a community club promoting senior, junior, Sunday and women&#39;s football. The same season 2018-9 Manager Jason Shaw gained promotion in his fourth campaign by going unbeaten all season, only dropping four points and winning 34 consecutive matches, also winning the Middlesex Premier Cup against a strong Cockfosters side. “The Invincibles” started the 2019-20 season back in the Spartan South Midlands Premier Division, a return to Step 5 football, a season that was expunged due to the Covid 19 virus. The Hares introduced a ladies side for the first time, managed by former Reserve team coach Vince Bairda with his coach Brian Keeley, and were looking good for promotion before the season was curtailed. Jason Shaw now looks to begin his sixth season with the club with the Hares playing Step 5 football again, here’s to the next 150 years!