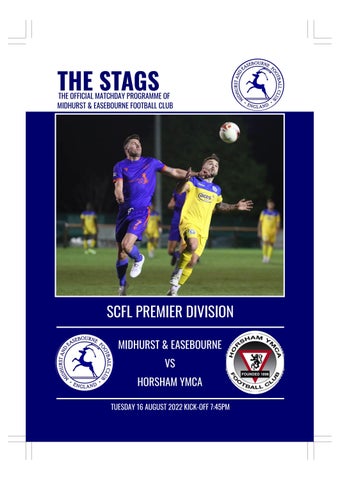 The club has 2 senior teams and 8 youth teams. The First Team are currently members of the Southern Combination Football League and compete in Division , whilst the Reserves play in the East Division of the Hampshire Development League. The club was established in 1946 by a merger of Midhurst, whose ground had been used to build a school on, and Easebourne, who had lost several officials and players during the World War II. They joined the West Sussex League and went on to win the title in 1955–56, 1962–63 and 1964–65, as well as the Malcolm Simmonds Memorial Cup in 1959– 60. After the top division was renamed the Premier Division, the club won the league again in 1967–68, the Bareham Cup in 1970–71 and the Malcolm Simmonds Memorial Cup in 1973–74. They won the Premier Division and Malcolm Simmonds Memorial Cup double in 1976–77 and retained the cup the following season, before winning another league and cup double in 1979–80. Although an application to join the Sussex County League was rejected in 1980, they were accepted into the league the following year, becoming members of Division Two.

Good Evening welcome back to The Rotherfield for tonight’s Southern Combination Premier fixture, as we welcome Horsham YMCA Like to welcome tonight’s Match officials along with our visitors Horsham YMCA their management team, committee members and supporters.

Like to give a special welcome back to former Stag Keeper Aaron Jeal who was involved with the club before my time. I’m really looking forward for tonight’s game Horsham YMCA will be a good test for us, they’re another big club for our league with some top players. Josh Neathey who was the standout player in our league last year, he has joined them over the summer. There front line is very good, again were need to be on it if we’re not we’re definitely get punished tonight. It’s been a very pleasing start to the season with us proving a lot of people wrong to date. I won’t let the lads get carried away as things can change very quickly. We’ve gone from being an underdog to now teams looking at us in a different way. Squad wise we’re be without Dan Wood tonight following his concussion Saturday, Pleased to report he’s ok but there are guidelines we’re follow to make sure his welfare comes first. Skipper Harry Giles, Billy Connor I’m hoping to have back in the squad tonight which gives us a extra boast. Enjoy the game

Midhurst &amp; Easebourne 1 v 0 Eastbourne Town Stags continued there fine start to life in the Southern Combination Premier Division with a very hard thought victory over Eastbourne Town. On a scorching hot day the Stags started really well, in opening 5 minutes Marcus Bedford forced Town keeper Chris Winterton into a very smart save with the keeper diving to his right tipping Bedford&#39;s effort around the post following good link up play between Liam Dreckmann, Charlie Osbourne. Stags kept pushing as we approached the first water break. Osbourne fired over when well placed. As the half was progressing the visitors were working themselves back into the game. They’re best chance fell to Tyler Capon who fired wide from six yards after good play by James Waters.

In the thirty eighth minute Stags took the lead. James Liddiard’s cross want dealt with Harry Tremlett was bundled to the ground with the loose ball falling to Marcus Bedford who fired home. Remaining seven minutes of the half was a stop start affair. Second half never really got going with the heat clearly affecting the players. As the half progressed tempers started to rise. Stags we’re clearly frustrating the visitors, with several water breaks plenty of substitutes. Only real flow was closing ten minutes Town pushed forward but Stags back line defended superbly without keeper Josh Bird being called upon. Stags Boss Andy Ewen said. We started well, in today’s conditions the first goal was going to be crucial thankfully we got it. Second half we managed the game superbly, the lads really dug in, stuck together and ground it out.

Gorings Mead for which they were able to secure the freehold at a later date. In the early years &#39;YM&#39; played in the Horsham District League before moving to the Crawley League and subsequently to the Mid Sussex League. Their rise through the later two leagues was swift and facilitated the club&#39;s entry into the Sussex County League in 1959. In that first season, YM finished twelfth out of fifteen teams and then began a gradual improvement. They spent seven years in Division 2 before gaining promotion in 1966 as Champions, two points ahead of Newhaven. During that season they dropped just four points from 34 matches, scoring 141 goals in the process - a superb performance. The club gained Division 1 status along with Newhaven and remained there for sixteen seasons until the end of the 1981-82 season, when unfortunately they were relegated. The best performances during that period were two consecutive third place finishes in 1977-78 and 1978-79.

In the 1999-00 season, YM had their best ever results in both the FA Cup and the FA Vase, and it was only dubious decisions by match officials that halted progress in both competitions. In their FA Cup Fourth Qualifying Round tie at home to Chelmsford City, the winning goal was scored by a player who was so far offside, the linesman probably did not notice him before it was too late, whilst in their Fourth Round FA Vase tie away at AFC Totton, a dubious penalty late in the second half ended YM&#39;s dreams of reaching Wembley. In September 1999 the club&#39;s attendance record was smashed when a crowd of over 940 people crammed into &#39;The Mead&#39; for the Fourth Qualifying Round of the FA Cup against Chelmsford City.

Horsham YMCA Football Club was formed in 1898. During the first 31 years of the club&#39;s existence they played at Lyons Field, the name of which is derived from the Bowes-Lyons family who owned a substantial amount of land around Horsham at one time. In 1929 the club moved to its present ground at

During the 2000-01 season, YM graciously bowed out of the FA Cup at Whyteleafe, and at Cowes Sports in the FA Vase, but reached the semi-finals of the Sussex Senior Cup before losing to Bognor Regis. Despite these three cup defeats, YM did manage to add some silverware to their trophy cabinet by winning the Sussex RUR Cup, with an emphatic 3-0

victory over Burgess Hill Town, whilst the Reserve Team achieved a League and Cup double. The 2002-03 season saw the re-establishment of a Youth side at YM, with the aim being to grow new players over the following few years in order to participate in the senior teams. YM cruised high in the league all season, recording a record 22-1 victory over Littlehampton Town, before finally being pipped into third position at the end of the season. The Reserves finished mid-table and the new Youth team finished second in Division One of the Arun &amp; Chichester League, losing out only on goal difference, although they beat the League Champions 1-0 in the League Cup. With YM trailing Ringmer by twelve points as the 200506 season reached its climax, and struggling to find the money for the required work on the ground, it looked like that might have been it for YM. But remarkably, however, the players maintained their resolve as their rivals buckled, and YM not only over-turned the deficit, but romped home by nine points to achieve back-toback League titles. The 2009-10 season saw another change at Gorings Mead, with YM becoming landlords of former neighbours, Horsham FC. This highlighted the challenges of ground shares across the country, but both teams did well, YM achieving eleventh place and their highest ever points total in the Ryman League. Sadly, at the end of the season Chris White left the club for Worthing. The following two seasons saw the club in a state of flux, with a number of managers (Colin Jenkinson, John Cumberbatch and Sammy Donnelly) coming and going, and even more players doing the same. At the end of the 2011-12 season, Peter Buckland stepped in to steady the YM ship, saving the club from relegation by winning the last game of the season. Buckland then built a squad for the 2012-13 season, which produced a very respectable mid-table finish. The nucleus of this same squad then pushed on in the 2013-14 season to be real promotion contenders though finally losing out on that accolade thanks to an

89th minute Littlehampton Town winner on the final day of the season. Nonetheless 2013-14 was an impressive season, with YM reaching the semi-finals of the Sussex Senior Cup and winning the RUR Cup on penalties in their final game of the season. In comparison to 2013-14&#39;s fourth placed Sussex County League finish, RUR Charity Cup triumph and Sussex Senior Challenge Cup semi-final appearance, YM must view the 2014-15 campaign as a huge underachievement. A 4-2 win over Chichester City on the final day of the season secured a respectable fifth placed Division 1 finish for Peter Buckland’s side, but this was one spot lower and eight points worse off than the prior year, and with double the number of defeats. Perhaps even more disappointing was YM’s poor record in the season’s cup competitions, with runs in the FA Cup and FA Vase, Sussex Senior Cup, RUR Charity Cup and Peter Bentley League Challenge Cup all over by December. 2015-16 season saw the Sussex County Football League renamed the Southern Combination Football League and the top division renamed as the Premier Division. YM finished in fourth place in that season and in 10th position in 2016-17 season. However, the club did not distinguish itself in cup competitions in either campaign. Non-league league restructuring meant that there were two promotion places available for season 2017-18 and in a determined effort to gain promotion YM led the division for several months before falling away to a fourth-place finish. Season 2018-19 saw YM put in a strong challenge in the league. However, disappointing results in the final quarter of the campaign saw YM finish as runners-up by nine points to champions Chichester City. 201920 season saw YM in 12th place in the league before the season was curtailed, and results were expunged.

The 2020/21 season saw YM struggle following the restart of the SCFL after the relaxation of covid19 regulations before the season once again was curtailed and ultimately voided early in 2021 with the club sitting in the bottom end of the division.