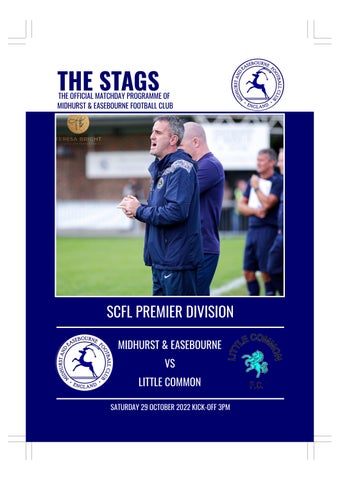 Good afternoon welcome back to The Rotherfield. I’d like to welcome today’s visitors Little Common along with the match officials. Tuesday night we progressed into the 3rd Round of the RUR Cup with victory over Mile Oak on penalties.

Cup games are about getting through we eventually found a way with 5 well taken penalties, Josh making a good save. Must give credit to our visitors who worked really hard and made it a good contest. We did miss some good chances. pleasing to see certain players get some valuable minutes due to injury and illness. Squad wise were gradually getting stronger with bodies returning. We now need to find the form we had at the start, October has been an inconsistent month, with us dropping what I call silly points. Overall the first 1/3 of the season has been pleasing, if somebody said at the start your still be in 3 cups, sitting 8th place I would of taken it, so on reflection it’s positive, remember where we were then it makes you realise. it’s another building project that’s work in progress.

We had a real good analysis session Thursday which pleased me. These sessions are so valuable as we can show the lads the good, along with the bad, it really makes them realise. It’s what’s needed if we want to keep improving. Enjoy the game

LEWIS HOLE 44 Little Common Football Club formed originally as Albion United in 1966, when Ken Cherry had a vision for youth football in the area. Initially two youth teams were formed one at Under 16 level and one at Under 14 level. However, the two teams grew like topsy and today the club runs sixteen youth and four senior teams.

Albion United started life in the Hastings League and was very soon running two sides instead of the planned one and they moved to the East Sussex league. That league held no bounds for the highly successful United sides and after the double winning success of the 1977/78 season the club successfully applied to join the Sussex County League Division Two. In 1974 the club committee decided to provide the club with its own club house and changing rooms, to include showers and a bar after spending eight years on grounds which did not have such facilities. The club obtained two prefabricated houses which were built in Fulham at the end of the Second World War. They cost £250 each and the necessary planning permissions were given. The club erected these two buildings, joined together, to make one large building; half was changing rooms, showers and toilets and the other half lounge and bar. This became the clubs home on entry to the Sussex County League and their first season saw them finish in the top five and they reached the Division 2 Cup Final only to be beaten by Crowborough Athletic. Subsequent seasons saw the club occupy a mid to lower position in the table, actually finishing bottom in 1980/81 and 1981/82 (Division Three was not formed until 1983). Albion enjoyed their best placing since entering the League when they finished 6th in 1985/86 and changed their name to Little Common Albion at the end of that season. The newly named club again finished in 6th place the next two seasons, before their fortunes began to slump once again. In 1993/94 they were relegated after finishing bottom; and left the League altogether after finishing 15th of 16 in Division Three the following season. The 1990s proved a difficult period for the club and they re-joined the East Sussex League. A third consecutive relegation was a huge blow for the club and in the space of just three seasons they had gone from playing senior football to junior football. The club committee decided that in order for the club to progress further new facilities were

required in order to attract and retain players. Buoyed on by a thriving youth policy the club began its rebuilding process. The club joined together with the local council and cricket club in order to develop a project to build a new sports pavilion. After many years of hard work by all involved the project finally began to get moving and in 1999 a £262,000 Sport England Lottery Grant was awarded for the project. Building finally began in 2001 and the club moved into its new home in November 2002.

season saw Common finish outside of the relegation zone. The 2012/13 season saw the club finish 3rd but ground grading regulations prevented the club from being promoted. At the beginning of 2016 the club lost its founder and chairman, Ken Cherry, fifty years after forming the club. The 2016/17 season saw Common finish runners-up to Saltdean United and their highest ever league placing, once again ground grading regulations prevented them from being promoted to the Premier Division and a ground share agreement was secured On the pitch the clubs fortunes continued to with Eastbourne United for the 2017/18 season. fluctuate, a successful 1998/99 season saw The Commoners went on to claim the Division Common just miss out on promotion to SeaOne League and Cup double in the 2017/18 ford before being relegated the following seaseason to seal a place in the Premier Division son. A rise followed with an instant return to for first time in the club&#39;s history. Despite a the Premier Division and after avoiding relega- tough season the Commoners enjoyed a good tion on the final day of the 2003/04 season the end to the 2018/19 season to finish outside of club committee decided to make a concerted the relegation places and secure another seaeffort the following season to realize its ambison in the premier division. The following two tion of a return to the Sussex County League. seasons saw the Commoners comfortably placed when the league season was curtailed After spending ten seasons in the East Sussex due to the Covid pandemic, during the 2020/21 League, the club were successfully crowned season, Common’s all-time leading goal scorer, Premier Division champions in the 2004/05 Lewis Hole, scored his 350th goal for the season and applied for a return to the County club. In September 2020, the club finally reLeague. After carrying out the essential work to ceived planning permission to enclose their their ground to achieve promotion the club ground and make the necessary improvewas successful in its application. After spending ments for Step 5 football and in January 2022 four seasons in Division 3 the club was promot- the club finally returned to its home at Little ed to Division 2 at the end of the 2008/09 seaCommon Recreation Ground. son after clinching the second promotion spot In the 2008–09 season the club again gained on the final day of the season against Bosham. promotion to Division one but only survived The club went on to record a 4th place finish in one season back in the top flight of the Sussex the 2009/10 season before a mid-table finish in league. 2010/11. The 2011/12 season saw a change in management after a disappointing start to the campaign, Russell Eldridge returned to the club and a win on the final weekend of the