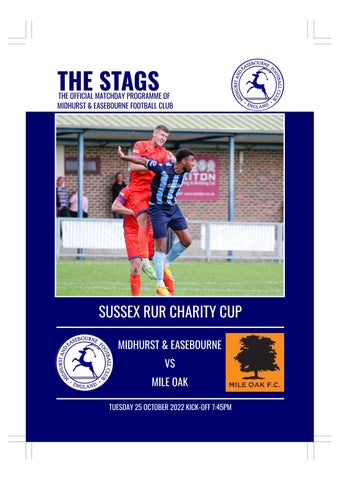 Good Evening welcome back to The Rotherfield where we have consecutive Home games this week. First up in the RUR Cup I’d like to welcome tonight’s visitors Mile Oak along with the match officials. Firstly I must apologise to those who made the trip to The Withdean Stadium on Saturday. It was an embarrassing day for us, in fact was our worst performance in my time managing this club, something I’m not use to and won’t except. Moving on tonight we welcome Mile Oak who always give us a tough game. I’m expecting a good reaction, the last 2 league games have not matched the standards this group have set. Squad wise we’ve got a few players returning Billy Connor is massive for us we’ve missed him so much since he got Injured and went travelling not just on the pitch but also in the dressing room. Jordan Stallibrass returns from suspension, he has settled in really well since he joined us. Skipper Harry Giles is back following his sickness bug. Seamus Tilley will step up from the Reserves he’s been a standout for them, trained really well with us fully deserving an opportunity. Lewis Hamilton won’t be pushed tonight I’m expecting he will be fit for Saturday. Will Essai is still recovering from a chest infection, we won’t make a decision until Monday regarding him. All of a sudden we’re in really good shape, lads now are playing with a bit of pressure to reach levels I require. Enjoy the game

JOSH COOPER 41 Mile Oak FC was formed in 1960 and started in Division eight of the Brighton, Hove &amp; District Football League and won the division at the first attempt, and was promoted to Division six. Further promotion followed in the 1963–64 season when

the club finished as runners up in Division six and the club was promoted again the following season. The club&#39;s first attempt at Division four saw them finish as champions, however four seasons later the club was back in Division five. A season later they were back in Division four and the 1971–72 campaign saw them finish as runnersup and promotion to Division two. The club had instant success in Division two finishing as champions, a feat they repeated the next season in Division one. The 1980–81 season saw the club become winners of the Brighton League. In 1986 made the decision to leave the Brighton, Hove &amp; District Football League to become a senior club in the Sussex County League, and an application was made to join the Southern Counties Combination League, which was a feeder into the Sussex &#39;pyramid&#39;. After just one season, the club won promotion to Division Three of the County League as champions. After five seasons, promotion was gained to Division Two in 1991–92, as runners-up to Hassocks, and then to Division One as champions in 1994–95. They stayed in this division for three seasons, and were relegated back to Division two in 1997–98 In 2005–06 they won some silverware after defeating Sidlesham 1–0 in the Final of the Division Two Challenge Cup.

Name - Jordan Warren Position - Defender Most Skilful - Marcus Bedford Quickest - Billy Connor Slowest - probably say myself Worst Trainer - Oli Kershaw is defo up there Worst Dress - Has to be Marcus. Can’t even Fill out a medium Most Intelligent - Lewis Hamilton Least Intelligent - Surely Marcus again. Makes me look clever. Longest in shower - Harry Giles Best player played with - Jason Prior in a couple of Bognor appearances [Pictured, Below] Favourite Meal Gourmet Burger Got to Drink Disaronno + coke Ronaldo or Messi Messi all day Holiday with misses or Lads - no comment

Team Support - Brighton Biggest Fear Spiders are defo up there