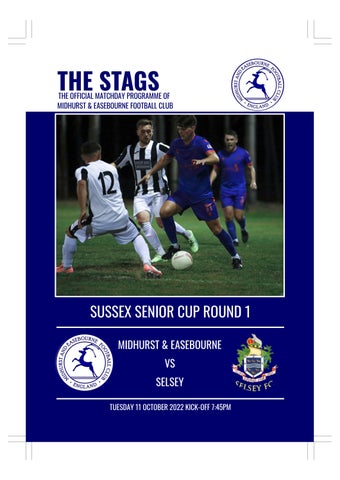 Good evening welcome back to The Rotherfield, for tonight’s Sussex Senior Cup tie. I’d like to welcome tonights visitors Selsey, their management team, committee members and supporters. Selsey will provide us another tough game tonight, they’ve started the season very well which is no surprise to me with the attacking power they have, Darren’s teams are always very organised and fit. Saturday was our best team performance for several weeks. The clean sheet was important as last week conceding in the last minute really annoyed me. We threw new signing Jordan straight in, he repaid us massively with a good performance and getting himself a brace. Squad wise I’m now back happy where we currently are; Will Essai has returned after a spell at Petersfield Town, Jordan Stallibrass has arrived from Shoreham, Lewis Hyde has dual signed from Chichester City. Billy Connor will be back this week after his injury and travelling in Australia. Charlie Cooper has recently left the club, I thank him for his efforts during his time here. Enjoy the game

1954/55, 1956/57, 1957/58, 1958/59 and 1960/61, together with the Malcolm Simmonds Memorial Cup on four occasions in 1955/56, 1956/57, 1957/58 and 1958/59. They also added the Sussex County FA Intermediate Cup trophy to their haul in 1958/59. Selsey made the step up to the Sussex County League in 1961 and made an immediate impact on Division Two, when finishing runners-up to champions Shoreham in their first season. Selsey gained promotion to Division One in 1963/64, ending the season as champions and were also winners of the Division Two Invitation Cup. The club remained in the top division for five years before being relegated in 1969. The highlight of their early existence in the County scene was when they appeared at the Goldstone Ground, Brighton and were narrowly beaten by Eastbourne Utd 1-0 in the Sussex Senior Cup in season 1962/63. A return to the top flight was achieved in season 1975/76, again as champions, but within two seasons the club once again found itself back in Division Two. They then endured a further nine seasons in the lower division until they gained promotion back to Division One for the third time in 1986/87, as runners-up to Pagham. Their two chances of cup glory during that time came in 1984/85 when they were runners up in the Division Two Cup losing to local rivals Chichester City 2-1 and in 1986/87 when they were eventual winners. Once back in Division One Selsey managed to survive for four seasons, until finishing bottom in 1991 with just 12 points. They had another chance of silverware in 1989/90 but again failed in the final when they lost to Langney Sports in the John O&#39;Hara League Cup. They made amends by winning the County League five a side tournament at the Brighton Centre. The club then had a period of success when they were runners up in the Division Two Cup in 1994/95 and winners of it the following season, together with winning promotion to Division One again in 1995/96. The club then enjoyed its longest spell in Division One, a period of eight years. It then had its most successful time, when Danny Hinshelwood took control of the club in 2000.Season 2001/02 saw them win the SCFA RUR Cup and the following year saw them lift the John O&#39;Hara League Cup. In 2000/01 and 2001/02 the club finished 4th on both occasions, their highest finish to date. Problems behind the scenes at the club, however, saw them start the 2003/04 amongst the favourites for relegation. The annual curtain-raiser - The Norman Wingate Trophy - did little to dispel those feelings, as Whitehawk thumped a woeful Selsey side 6-1. The remainder of the season followed suit as Selsey were relegated to Division Two.

Following two seasons of rebuilding and restructuring, and with Danny Hinshelwood back in charge the 2005/06 campaign saw Selsey back to something like their best. They gained promotion back to Division One and in 2006/07, they finished in 8th place. They also won their way through to the SCFA RUR Cup final again in season 2007/08, but could not record their second triumph of this long established competition, losing to Three Bridges. A 15th place finish kept them in Division One. Another cup final appearance was to come Selsey’s way in 2011/12 when they played Rye Utd in the SCFA RUR Cup, but again could not record a win and lost 2-0. In 2011 the club made improvements to the ground in line with the FA ground grading requirements and now has a ground worthy of its County League status. Selsey’s 2012/13 season saw some highs and lows. League wins at Hassocks and Redhill were the pick of the bunch and an emphatic 4-0 thumping of Rye Utd avenged the cup final defeat from the previous season. A total of eleven league wins and twelve draws saw Selsey finish 18th in the league, only avoiding relegation by four points. The following season started with great enthusiasm and optimism. Ex Brighton and Hove Albion favourite Adam Hinshelwood was in charge of the side and things looked good for the new campaign. However, a far from bright start saw Selsey draw their first game and lose their next three before beating local rivals Chichester 2-1 at home in the league. Early exits were recorded in the FA Cup and FA Vase and their league form was inconsistent. This form led to Hinshelwood resigning as Manager when they lost away to 2nd Division outfit Broadbridge Heath in the SCFA RUR Cup. Ryan Pharo took over the hot-seat and stabilized the ship, recording notable victories against Pagham and Hassocks. Pharo’s rein at the Club however was short-lived and he was removed from his post in March. The Club decided to take on a Youth policy and needed to promote from within. Steve Bailey was promoted to the position of Manager and with half the first team squad leaving the Club it was a difficult end to the season. They lost seven of their last eight matches only winning the last game of the season at home to Lingfield 3-2. This win secured their place in Division One for another term. The 2014-15 Season proved to be a very difficult time for the Club. The first team struggled in the league and never looked like holding onto their position in Division One. They ended the season in bottom place with only eleven points to their name which meant relegation to the newly formed Southern Combination Football League. Their cup exploits did

not fare any better with defeats in the first round of each competition. The 2015-16 season again proved to be tough for Steve Baileys’ side. It took until the second week in October before they recorded their first league victory. (The first game of the season was awarded to Selsey when Saltdean Utd FC was unable to raise a team). Early Cup wins in the Peter Bentley Cup and Division One Cup were an improvement on the previous term, but unfortunately the side went out of these competitions before any silverware came their way. For the third season running Selsey were either, already relegated, or needing a result on the last day of the season, to ensure they did not end up in the bottom three. A 1-1 draw at home to Southwick was sufficient for the team to retain its Division One status and plan for the season ahead. 2016-17 saw an improvement in the league and Selsey finished in a respectable 7th position with 53 points. Again, there were early exits in the cup competitions but some good performances throughout the season, suggested the Club was heading in the right direction. Much was expected in season 2017-18, but Selsey were unable to improve upon the previous season’s finish. They maintained a mid-table position when they finished 9th on 47 points. The side fared no better in the cup competitions and the season ended up a bit of a disappointment. It was at the end of this season that a managerial change was made. Steve Bailey was replaced by ex-player Daren Pearce, who had previously been in charge at nearneighbours Sidlesham FC. 2018-19 saw an immediate improvement and the 1st team ended up in 5th position with 66 points. The National and County cup competitions were not favourable to Selsey and interest in these, was again, lost in the early rounds. However, the U18s were dominant in the league. They not only won the U18 West Division, but they also won the SCFL Champions of Champions final. Things looked very bright for the club moving forward. The next two seasons were disrupted by the COVID19 pandemic. Season 2019-20 was terminated in March 2020 and, whilst season 2020-21 got under way, it, also, was not concluded. Fortunately, a lot of the COVID-19 restrictions were lifted for the commencement of the 2021-22 season and this started on Saturday 31st July

Name - Josh Bird Position - Goalkeeper Most Skilful - Marcus Bedford Quickest - Billy Connor Slowest - I’ve got to take that one Worst Trainer - Olly Kershaw, has parents evening every other week Worst Dress - Close one but has to be Trem for the shoes Most Intelligent - Arnold Least Intelligent - Marcus Longest in shower - Trem, takes us forever to leave anywhere Best player played with - My mate Jake Slater Favourite Meal - Love a Nando’s Got to Drink - Corona Ronaldo or Messi - Ronaldo [Pictured, right] Holiday with misses or Lads misses, she books everything for us Team Support - Portsmouth Biggest Fear -Spiders can’t stand them