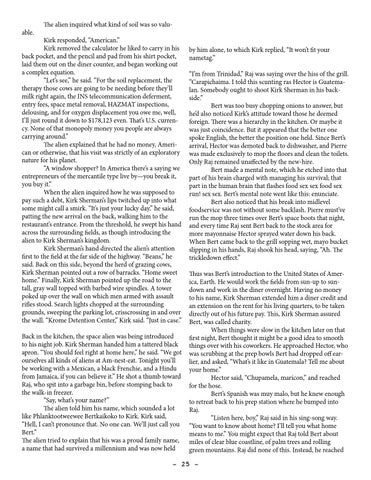 The alien inquired what kind of soil was so valuable. Kirk responded, “American.” Kirk removed the calculator he liked to carry in his back pocket, and the pencil and pad from his shirt pocket, laid them out on the diner counter, and began working out a complex equation. “Let’s see,” he said. “For the soil replacement, the therapy those cows are going to be needing before they’ll milk right again, the INS telecommunication deferment, entry fees, space metal removal, HAZMAT inspections, delousing, and for oxygen displacement you owe me, well, I’ll just round it down to $178,123 even. That’s U.S. currency. None of that monopoly money you people are always carrying around.” The alien explained that he had no money, American or otherwise, that his visit was strictly of an exploratory nature for his planet. “A window shopper? In America there’s a saying we entrepreneurs of the mercantile type live by—you break it, you buy it.” When the alien inquired how he was supposed to pay such a debt, Kirk Sherman’s lips twitched up into what some might call a smirk. “It’s just your lucky day,” he said, patting the new arrival on the back, walking him to the restaurant’s entrance. From the threshold, he swept his hand across the surrounding fields, as though introducing the alien to Kirk Sherman’s kingdom. Kirk Sherman’s hand directed the alien’s attention first to the field at the far side of the highway. “Beans,” he said. Back on this side, beyond the herd of grazing cows, Kirk Sherman pointed out a row of barracks. “Home sweet home.” Finally, Kirk Sherman pointed up the road to the tall, gray wall topped with barbed wire spindles. A tower poked up over the wall on which men armed with assault rifles stood. Search lights chopped at the surrounding grounds, sweeping the parking lot, crisscrossing in and over the wall. “Krome Detention Center,” Kirk said. “Just in case.” Back in the kitchen, the space alien was being introduced to his night job. Kirk Sherman handed him a tattered black apron. “You should feel right at home here,” he said. “We got ourselves all kinds of aliens at Am-nest-eat. Tonight you’ll be working with a Mexican, a black Frenchie, and a Hindu from Jamaica, if you can believe it.” He shot a thumb toward Raj, who spit into a garbage bin, before stomping back to the walk-in freezer. “Say, what’s your name?” The alien told him his name, which sounded a lot like Phlanktootweewee Bertkaikoko to Kirk. Kirk said, “Hell, I can’t pronounce that. No one can. We’ll just call you Bert.” The alien tried to explain that his was a proud family name, a name that had survived a millennium and was now held

by him alone, to which Kirk replied, “It won’t fit your nametag.” “I’m from Trinidad,” Raj was saying over the hiss of the grill. “Carapichaima. I told this scunting ras Hector is Guatemalan. Somebody ought to shoot Kirk Sherman in his backside.” Bert was too busy chopping onions to answer, but he’d also noticed Kirk’s attitude toward those he deemed foreign. There was a hierarchy in the kitchen. Or maybe it was just coincidence. But it appeared that the better one spoke English, the better the position one held. Since Bert’s arrival, Hector was demoted back to dishwasher, and Pierre was made exclusively to mop the floors and clean the toilets. Only Raj remained unaffected by the new-hire. Bert made a mental note, which he etched into that part of his brain charged with managing his survival; that part in the human brain that flashes food sex sex food sex run! sex sex. Bert’s mental note went like this: enunciate. Bert also noticed that his break into midlevel foodservice was not without some backlash. Pierre must’ve run the mop three times over Bert’s space boots that night, and every time Raj sent Bert back to the stock area for more mayonnaise Hector sprayed water down his back. When Bert came back to the grill sopping wet, mayo bucket slipping in his hands, Raj shook his head, saying, “Ah. The trickledown effect.” Thus was Bert’s introduction to the United States of America, Earth. He would work the fields from sun-up to sundown and work in the diner overnight. Having no money to his name, Kirk Sherman extended him a diner credit and an extension on the rent for his living quarters, to be taken directly out of his future pay. This, Kirk Sherman assured Bert, was called charity. When things were slow in the kitchen later on that first night, Bert thought it might be a good idea to smooth things over with his coworkers. He approached Hector, who was scrubbing at the prep bowls Bert had dropped off earlier, and asked, “What’s it like in Guatemala? Tell me about your home.” Hector said, “Chupamela, maricon,” and reached for the hose. Bert’s Spanish was muy malo, but he knew enough to retreat back to his prep station where he bumped into Raj. “Listen here, boy,” Raj said in his sing-song way. “You want to know about home? I’ll tell you what home means to me.” You might expect that Raj told Bert about miles of clear blue coastline, of palm trees and rolling green mountains. Raj did none of this. Instead, he reached 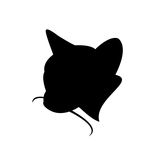