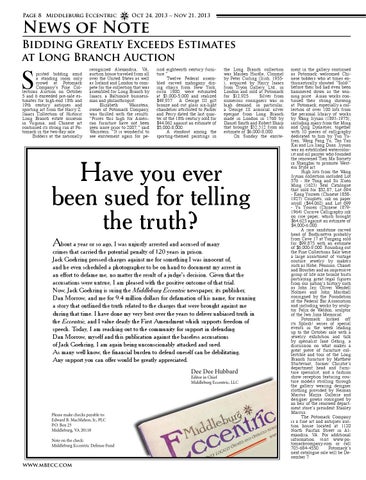 pirited bidding amid a standing room only crowd at Potomack Company’s Fine Collections Auction on October 5 and 6 exceeded pre-sale estimates for high-end 18th and 19th century antiques and sporting art from the Harry Z. Isaacs Collection of Historic Long Branch estate museum in Virginia, and Chinese art continued its strong run at Potomack in the two-day sale. Bidders at the nationally

recognized Alexandria, VA, auction house traveled from all over the United States as well as Ireland and London to compete for the collection that was assembled for Long Branch by Isaacs, a Baltimore businessman and philanthropist. Elizabeth Wainstein, owner of Potomack Company, was thrilled with the results. “Prices this high for American furniture have not been seen since prior to 2007,” said Wainstein. “It is wonderful to see excitement again for pe-

riod eighteenth century furniture.” Twelve Federal assembled carved mahogany dining chairs from New York, circa 1800, were estimated at $3,000-5,000 and realized $49,937. A George III gilt bronze and cut glass six-light chandelier attributed to Parker and Perry dated the last quarter of the 18th century sold for $44,062 against an estimate of $5,000-8,000. A standout among the sporting-themed paintings in

the Long Branch collection was Maiden Hurdle, Clonmel by Peter Curling (Irish, 1955), acquired by Harry Isaacs from Tryon Gallery, Ltd., in London and sold at Potomack for $12,925. Silver from numerous consigners was in high demand; in particular, a George III armorial silver epergne from Long Branch made in London in 1768 by Daniel Smith and Robert Sharp that brought $32,312 from an estimate of $6,000-8,000. On Sunday the excite-

Have you ever been sued for telling the truth? About a year or so ago, I was unjustly arrested and accused of many

crimes that carried the potential penalty of 120 years in prison. Jack Goehring pressed charges against me for something I was innocent of, and he even scheduled a photographer to be on hand to document my arrest in an effort to defame me, no matter the result of a judge’s decision. Given that the accusations were untrue, I am pleased with the positive outcome of that trial. Now, Jack Goehring is suing the Middleburg Eccentric newspaper, its publisher, Dan Morrow, and me for 9.4 million dollars for defamation of his name, for running a story that outlined the truth related to the charges that were brought against me during that time. I have done my very best over the years to deliver unbiased truth in the Eccentric, and I value dearly the First Amendment which supports freedom of speech. Today, I am reaching out to the community for support in defending Dan Morrow, myself and this publication against the baseless accusations of Jack Goehring. I am again being unconscionably attacked and sued. As many well know, the financial burden to defend oneself can be debilitating. Any support you can offer would be greatly appreciated. Dee Dee Hubbard

ment in the gallery continued as Potomack welcomed Chinese bidders who at times enthusiastically shouted “Sold!” before their bid had even been hammered down as the winning price. Asian works continued their strong showing at Potomack, especially a collection of over 100 lots from the personal library of works by Wang Jiyuan (1893-1975), including many from the Ming and Qing Dynasties, together with 10 pieces of calligraphy dedicated to him by Yun Yufren, Wang Fang Yu, Tan Yan Kai and Liu Jiang Duan. Jiyuan was an established watercolorist and oil painter who founded the renowned Tien Ma Society in Shanghai to promote Western Style art. High lots from the Wang Jiyuan collection included Lot 576 - He Tong and Su Xuen Ming (1623) Seal Catalogue that sold for $52,87, Lot 694 - Kang Youwei (Chinese 18581927) Couplets, ink on paper scroll ($44,062) and Lot 699 - Yu Youren (Chinese 18791964) Cursive Calligraphy ink on rice paper, which brought $64,625 against an estimate of $4,000-6,000. A rare sandstone carved head of Bodhisattva probably from Cave 17 at Yungang sold for $99,875 with an estimate of $6,000-9,000. Rounding out the Fine Collections Sale were a large assortment of vintage couture jewelry by makers such as Hobe, Pennino, Chanel and Boucher and an impressive group of life size bronze busts portraying great legal figures from our nation’s history such as John Jay, Oliver Wendell Holmes and John Marshall consigned by the Foundation of the Federal Bar Association and including works by sculptor Felix de Weldon, sculptor of the Iwo Jima Memorial. Potomack kicked off its Splash! series of special events in the week leading up to the October sale with a jewelry exhibition and talk by specialist Jane Gehrig, a discussion on what makes a great piece of furniture collectible and tour of the Long Branch furniture by Matthew Sturtevant, former Christie’s department head and furniture specialist, and a fashion show reception featuring couture models strolling through the gallery wearing designer clothing provided by Neiman Marcus Mazza Gallerie and designer gowns consigned by an heir of the renowed department store’s president Stanley Marcus. The Potomack Company is a fine art and antiques auction house located at 1120 North Fairfax Street in Alexandria, VA. For additional information, visit www.potomackcompany.com or call 703-684-4550. Potomack’s next catalogue sale will be December 7. 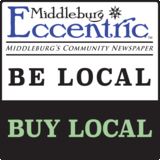