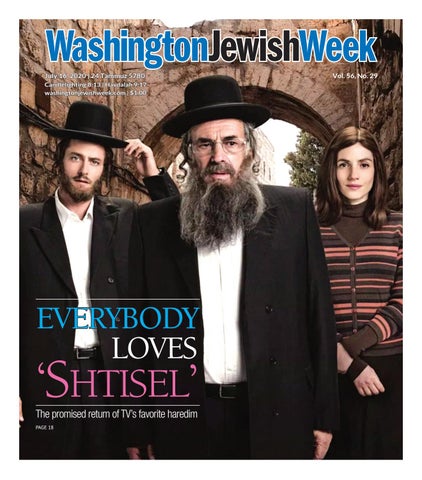 Fans are hooked, and they want more Comments from washingtonjewishweek.com

have watched Shtisel season 1 and 2 twice and I am waiting for season 3 – I have used the show to help me learn the Hebrew language – I know that the older family members also use German words. I also really enjoy the whole show – and the difference in their culture. I am from the UK. Elizabeth Rodgers

t’s been more than four years since “Shtisel” released a new episode, much to the chagrin of its fans. But that is about to change. Last month, “Shtisel” star Shira Haas shared a photo of herself on Facebook peeking out from behind a script labeled “Shtisel Season 3.” That was followed by YES studios, which produces “Shtisel,” posting other images of cast members with scripts or in costumes. It’s unclear how the COVID-19 pandemic will affect production, but what does seem certain is that new episodes are on their way. If the messiah can come, so can “Shtisel.” The Israeli drama has gathered followers around the world, particularly after the series began streaming on Netflix in 2018. It follows the members of the fictional Shtisel family as they deal with love, loss and other universal themes. The clan’s patriarch is Rabbi Shulem Shtisel (Dov Glickman), whose wife dies about a year before the start of the series. He lives with his youngest son, Akiva (Michael Aloni), who works as a teacher while nursing artistic aspirations and looking for love. Shulem’s daughter, Giti (Neta Riskin), struggles to make ends meet after her husband leaves her and her children. All this happens against a setting that, until the show’s debut, was unusual for a drama. “Shtisel” takes place in Geula, a haredi neighborhood “Shtisel,” like any soap opera, is driven by the relationships of its characters. in Jerusalem. The men wear dark and peyot, or sidecurls; the women long (Netflix/Dori Media) skirts and wigs. But for the most part, Geula and ultra-Orthodoxy are the While problems exist in the Orthodox world as they do in any other backdrop. The Shtisels don’t struggle with their faith or community. This community, “there’s a certain majestic charm of the [Orthodox] community, drama, like any soap opera, is driven by relationships. which people often don’t know because of how they’re depicted in the news,” For many fans, that’s what makes the show so special. Washington resident Inger Mobley is one of those fans. She fell in love with he said. “But choosing that community on my own, I feel like that beauty is best the show for its characters, who have kept her company in quarantine. “I’m still depicted in ‘Shtisel.’” “There are issues, but I just feel like ‘Shtisel’ did a good job in balancing stuck at home, and it made me feel like I had a place to escape,” said Mobley, out to some extent the view that is often adopted in broader culture of it as a who has now watched the series twice. Rabbi Eli Yoggev, of Beth Tfiloh Congregation in Baltimore, was impressed by foreign, weird, and standoffish community,” Yoggev continued. Yoggev said he thought the show could help people understand the haredi how the show represents the haredi community. community more. “‘Shtisel’ is a positive depiction of the Orthodox world I know,” he said. Mendy Schoenes, a Chasidic Jew in Baltimore, shares this perspective. Yoggev grew up in a similar community and appreciates the show’s hopeful Schoenes appreciates “Shtisel” for the overall storyline, the writers and the fact portrayal. The show’s popularity initially piqued his interest, but what drew that “the characters have struggles, they don’t live in a mansion.” He was parYoggev to binge all 24 episodes within three days was its sincerity. “I joined [that community] of my own volition and the show gives a homey ticularly moved by the show’s idea of finding one’s way in life, and relates to it. feeling,” he said. “It’s normal people with feelings and ups and downs.” Josh Glancy, writing for the Jewish Chronicle in London, said that “Shtisel”

Fans are rooting for Akiva, played by Michael Aloni, in his unspoken relationship with Elisheva. ( Netflix) changed his idea of the haredi community.“‘Shtisel’ is the first time I’ve seen the Charedi community depicted as fully-rounded people. … There is caustic wit and marital strife, wine and song and lashings of fragrant kugel. They fall in and out of love, smoke like hard-bitten newspaper hacks, scheme and fight and cry and laugh just like the rest of us.” Online, “Shtisel” fan groups have thousands of members. “Shtisel” – Let’s Talk About It, a group on Facebook, has more than 22,000 members, who post questions, comments and news about the show. In Greenbelt, Mishkan Torah Synagogue held gatherings for “Shtisel” fans to geek out, watch the show, and share bagels and good times, until quarantine put a halt to that. Rabbi Saul Oresky of Mishkan Torah is a fan of the show himself. He particularly appreciates the redemptive arc of the character Lippe, Giti’s estranged husband. “It showed people in this community to be really, truly fleshed-out real people with a full range of human emotions, which is not sometimes how the rest of the Jewish world even sees those communities. They either idealize them or treat them as different creatures entirely,” said Oresky. The complex characterizations help viewers empathize with and understand the Orthodox community. Even more, they are simply “more fair to the people involved,” said Oresky. “Shtisel” allowed him to explore the dynamic nature of humans,” said Oresky. It presents Orthodox Jews as people capable of making mistakes, but also

deserving of love. For Mobley, the romance of “Shtisel” is what draws her in, particularly Akiva’s relationship with an older widow named Elisheva. The feelings they have for each other are not expressed through body language, but rather through a rich palette of facial emotions. But, to Mobley, “Shtisel” is more than that. When the characters were heartbroken, she was heartbroken. When a certain character didn’t see how devoted another was, it reminded her of her own experiences with stifled affections. In a similar way to how Akiva and Elisheva loved each other, but were restricted in how they expressed it, Mobley’s mother never told her she loved her. She died without ever having said the words. Still, Mobley knew her mother loved her. She felt it through her mom’s actions. “Even if you can’t show affection outwardly, it kind of comes across anyway. I come from a family like that so it’s what I’m used to. I understand there’s still concern and love, it’s just not expressed.” In his piece for the Jewish Chronicle, Glancy explains how the show succeeds in being relatable to its viewers. “Finally,” he writes, “someone has taken me into this strange, confusing world, and shown it to be just as complex and human as my own.” WJW Carolyn Conte is a reporter for the Baltimore Jewish Times, an affiliated publication of Washington Jewish Week.

just happened upon it three weeks ago after finishing watching Mrs. Maisel. What a gem of a show Shtisel is, wonderful acting, characters that are complex and sometimes so frustrating. Giti is a true survivor and a women of such strength and determination. I am so looking forward to season three and onwards. I live in Nashville but am from Yorkshire. Ruth Levitt

enjoyed watching Shtisel during the coronavirus lockdown. It brought back many memories of 35 years ago when, as a teenage immigrant from Haiti, I worked for a whole year within the Ultra-Orthodox community in Boro Park, Brooklyn, NY; first as a janitor at the Bnos Zion of Bobov school, then as an order picker at Paskez Kosher food warehouse. I was fortunate to work alongside a “cool,” young Orthodox man who gave me an insider view of Orthodox Jewish life from A to Z to me, from match making rules to weddings and family life, holidays meaning, kosher food etc. etc. These were fascinating stories to me and instill in me a deep love and respect for Jewish life and Israel. I became and remain a loyal Friend Of Israel Jonas Alexandre

just binge watched seasons 1 and 2 and can’t wait for the next episode. Yes they cause their own problems, but having strict parents who don’t respect their children’s wants, needs and dreams is so very compelling. Hurry up season three! Faithful

EASON THREE! PLEASE hurry! I’m on pins and needles…..how long before we get more? This show is like eating chocolate for the first time…..All you want is more! Great! Fantastic! I’m not even Jewish but I love this series. PLEASE HURRY b huffhines

’m on the second round of watching Shtisel!! I CAN’T let it go! I really wanted Akiva to end up with Elisheva! I really hope there is a Season 3!! Esmerelda