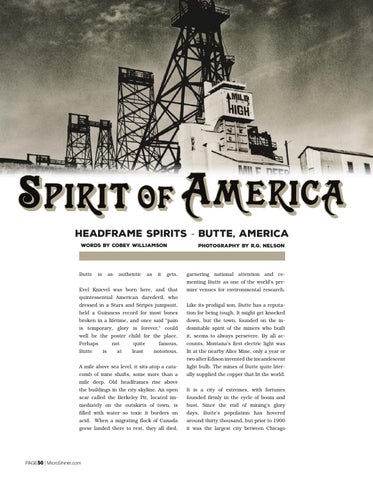 menting Butte as one of the world’s preEvel Knievel was born here, and that

quintessential American daredevil, who dressed in a Stars and Stripes jumpsuit,

held a Guinness record for most bones

broken in a lifetime, and once said “pain

down, but the town, founded on the in-

is temporary, glory is forever,” could

domitable spirit of the miners who built

well be the poster child for the place.

it, seems to always persevere. By all ac-

lit at the nearby Alice Mine, only a year or

two after Edison invented the incandescent A mile above sea level, it sits atop a cata-

light bulb. The mines of Butte quite liter-

comb of mine shafts, some more than a

ally supplied the copper that lit the world.

mile deep. Old headframes rise above the buildings in the city skyline. An open

It is a city of extremes, with fortunes

founded firmly in the cycle of boom and

mediately on the outskirts of town, is

bust. Since the end of mining’s glory

filled with water so toxic it borders on

acid. When a migrating flock of Canada

around thirty thousand, but prior to 1900

geese landed there to rest, they all died,

it was the largest city between Chicago 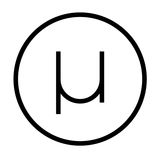