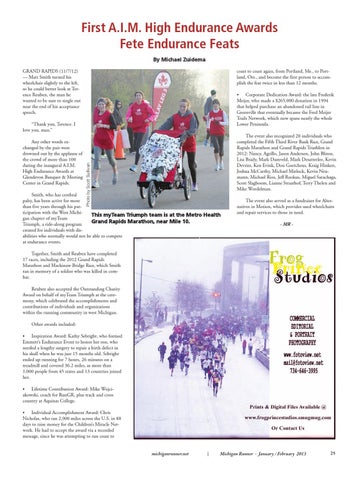 First A.I.M. High Endurance Awards Fete Endurance Feats By Michael Zuidema GRAND RAPIDS (11/7/12) — Matt Smith turned his wheelchair slightly to the left, so he could better look at Terence Reuben, the man he wanted to be sure to single out near the end of his acceptance speech.

coast to coast again, from Portland, Me., to Portland, Ore., and become the first person to accomplish the feat twice in less than 12 months. • Corporate Dedication Award: the late Frederik Meijer, who made a $265,000 donation in 1994 that helped purchase an abandoned rail line in Greenville that eventually became the Fred Meijer Trails Network, which now spans nearly the whole Lower Peninsula.

Any other words exchanged by the pair were drowned out by the applause of the crowd of more than 100 during the inaugural A.I.M. High Endurance Awards at Glendevon Banquet &amp; Meeting Center in Grand Rapids.

Smith, who has cerebral palsy, has been active for more The event also served as a fundraiser for Alterthan five years through his parnatives in Motion, which provides used wheelchairs ticipation with the West Michiand repair services to those in need. This myTeam Triumph team is at the Metro Health gan chapter of myTeam Grand Rapids Marathon, near Mile 10. Triumph, a ride-along program - MR third square template_third square 12/8/12 3:47 PM Page 1 created for individuals with disabilities who normally would not be able to compete at endurance events. Together, Smith and Reuben have completed 17 races, including the 2012 Grand Rapids Marathon and Mackinaw Bridge Run, which Smith ran in memory of a soldier who was killed in combat. Reuben also accepted the Outstanding Charity Award on behalf of myTeam Triumph at the ceremony, which celebrated the accomplishments and contributions of individuals and organizations within the running community in west Michigan. Other awards included: • Inspiration Award: Kathy Sebright, who formed Emmett’s Endurance Event to honor her son, who needed a lengthy surgery to repair a birth defect in his skull when he was just 15 months old. Sebright ended up running for 7 hours, 26 minutes on a treadmill and covered 36.2 miles, as more than 1,000 people from 45 states and 13 countries joined her. • Lifetime Contribution Award: Mike Wojciakowski, coach for RunGR, plus track and cross country at Aquinas College. • Individual Accomplishment Award: Chris Nicholas, who ran 2,900 miles across the U.S. in 88 days to raise money for the Children’s Miracle Network. He had to accept the award via a recorded message, since he was attempting to run coast to