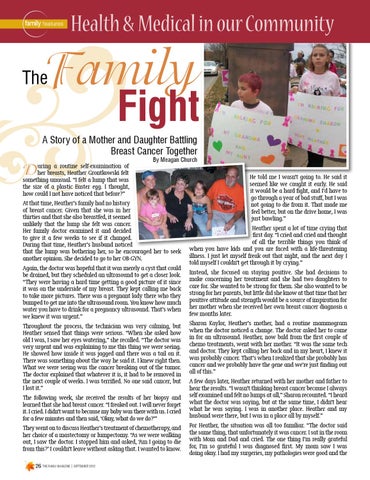 Health & Medical in our Community

A Story of a Mother and Daughter Battling Breast Cancer Together

uring a routine self-examination of her breasts, Heather Grontkowski felt something unusual. “I felt a lump that was the size of a plastic Easter egg. I thought, how could I not have noticed that before?” At that time, Heather’s family had no history of breast cancer. Given that she was in her thirties and that she also breastfed, it seemed unlikely that the lump she felt was cancer. Her family doctor examined it and decided to give it a few weeks to see if it changed. During that time, Heather’s husband noticed that the lump was bothering her, so he encouraged her to seek another opinion. She decided to go to her OB-GYN. Again, the doctor was hopeful that it was merely a cyst that could be drained, but they scheduled an ultrasound to get a closer look. “They were having a hard time getting a good picture of it since it was on the underside of my breast. They kept calling me back to take more pictures. There was a pregnant lady there who they bumped to get me into the ultrasound room. You know how much water you have to drink for a pregnancy ultrasound. That’s when we knew it was urgent.” Throughout the process, the technician was very calming, but Heather sensed that things were serious. “When she asked how old I was, I saw her eyes watering,” she recalled. “The doctor was very urgent and was explaining to me this thing we were seeing. He showed how inside it was jagged and there was a tail on it. There was something about the way he said it. I knew right then. What we were seeing was the cancer breaking out of the tumor. The doctor explained that whatever it is, it had to be removed in the next couple of weeks. I was terrified. No one said cancer, but I lost it.” The following week, she received the results of her biopsy and learned that she had breast cancer. “I freaked out. I will never forget it. I cried. I didn’t want to because my baby was there with us. I cried for a few minutes and then said, ‘Okay, what do we do?’” They went on to discuss Heather’s treatment of chemotherapy, and her choice of a mastectomy or lumpectomy. “As we were walking out, I saw the doctor. I stopped him and asked, ‘Am I going to die from this?’ I couldn’t leave without asking that. I wanted to know. 26 THE FAMILY MAGAZINE | SEPTEMBER 2012

He told me I wasn’t going to. He said it seemed like we caught it early. He said it would be a hard fight, and I’d have to go through a year of bad stuff, but I was not going to die from it. That made me feel better, but on the drive home, I was just bawling.” Heather spent a lot of time crying that first day. “I cried and cried and thought of all the terrible things you think of when you have kids and you are faced with a life-threatening illness. I just let myself freak out that night, and the next day I told myself I couldn’t get through it by crying.” Instead, she focused on staying positive. She had decisions to make concerning her treatment and she had two daughters to care for. She wanted to be strong for them. She also wanted to be strong for her parents, but little did she know at that time that her positive attitude and strength would be a source of inspiration for her mother when she received her own breast cancer diagnosis a few months later. Sharon Kaylor, Heather’s mother, had a routine mammogram when the doctor noticed a change. The doctor asked her to come in for an ultrasound. Heather, now bald from the first couple of chemo treatments, went with her mother. “It was the same tech and doctor. They kept calling her back and in my heart, I knew it was probably cancer. That’s when I realized that she probably has cancer and we probably have the gene and we’re just finding out all of this.” A few days later, Heather returned with her mother and father to hear the results. “I wasn’t thinking breast cancer because I always self examined and felt no lumps at all,” Sharon recounted. “I heard what the doctor was saying, but at the same time, I didn’t hear what he was saying. I was in another place. Heather and my husband were there, but I was in a place all by myself.” For Heather, the situation was all too familiar. “The doctor said the same thing, that unfortunately it was cancer. I sat in the room with Mom and Dad and cried. The one thing I’m really grateful for, I’m so grateful I was diagnosed first. My mom saw I was doing okay. I had my surgeries, my pathologies were good and the 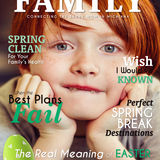