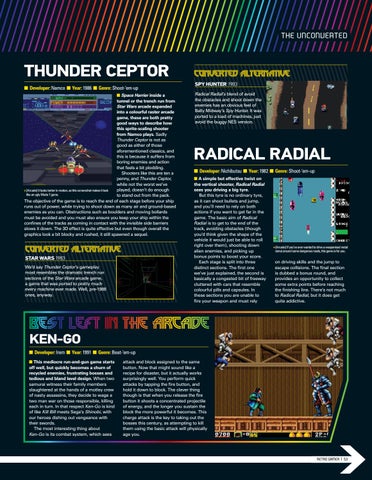 Thunder Ceptor ■ Developer: Namco ■ Year: 1986 ■ Genre: Shoot-‘em-up ■ Space Harrier inside a tunnel or the trench run from Star Wars arcade expanded into a colourful raster arcade game, these are both pretty good ways to describe how this sprite-scaling shooter from Namco plays. Sadly Thunder Ceptor is not as good as either of those aforementioned classics, and this is because it suffers from boring enemies and action that feels a bit plodding. Shooters like this are ten a penny, and Thunder Ceptor, while not the worst we’ve played, doesn’t do enough » [Arcade] It looks better in motion, as this screenshot makes it look like an ugly Mode 7 game. to stand out from the pack. The objective of the game is to reach the end of each stage before your ship runs out of power, while trying to shoot down as many air and ground-based enemies as you can. Obstructions such as boulders and moving bollards must be avoided and you must also ensure you keep your ship within the confines of the tracks as coming in contact with the invisible side barriers slows it down. The 3D effect is quite effective but even though overall the graphics look a bit blocky and rushed, it still spawned a sequel.

Converted Alternative Star Wars 1983 We’d say Thunder Ceptor ’s gameplay most resembles the dramatic trench run sections of the Star Wars arcade game, a game that was ported to pretty much every machine ever made. Well, pre-1988 ones, anyway.

Converted Alternative Spy Hunter 1983 Radical Radial ’s blend of avoid the obstacles and shoot down the enemies has an obvious feel of Bally Midway’s Spy Hunter. It was ported to a load of machines, just avoid the buggy NES version.

Radical Radial ■ Developer: Nichibutsu ■ Year: 1982 ■ Genre: Shoot-‘em-up ■ A simple but effective twist on the vertical shooter, Radical Radial sees you driving a big tyre. But this tyre is no ordinary tyre, as it can shoot bullets and jump, and you’ll need to rely on both actions if you want to get far in the game. The basic aim of Radical Radial is to get to the end of the track, avoiding obstacles (though you’d think given the shape of the vehicle it would just be able to roll right over them), shooting down alien enemies, and picking up bonus points to boost your score. Each stage is split into three distinct sections. The first one we’ve just explained, the second is basically a congested bit of freeway cluttered with cars that resemble colourful pills and capsules. In these sections you are unable to fire your weapon and must rely

» {Arcade] If you’ve ever wanted to drive a weaponised metal donut around some dangerous roads, this game is for you.

on driving skills and the jump to escape collisions. The final section is dubbed a bonus round, and provides an opportunity to collect some extra points before reaching the finishing line. There’s not much to Radical Radial, but it does get quite addictive.

best left in the arcade Ken-Go

■ Developer: Irem ■ Year: 1991 ■ Genre: Beat-‘em-up ■ This mediocre run-and-gun game starts off well, but quickly becomes a churn of recycled enemies, frustrating bosses and tedious and bland level design. When two samurai witness their family members slaughtered at the hands of a motley crew of nasty assassins, they decide to wage a two man war on those responsible, killing each in turn. In that respect Ken-Go is kind of like Kill Bill meets Sega’s Shinobi, with our heroes dishing out vengeance with their swords. The most interesting thing about Ken-Go is its combat system, which sees

attack and block assigned to the same button. Now that might sound like a recipe for disaster, but it actually works surprisingly well. You perform quick attacks by tapping the fire button, and hold it down to block. The clever thing though is that when you release the fire button it shoots a concentrated projectile of energy, and the longer you sustain the block the more powerful it becomes. This charge attack is the key to taking out the bosses this century, as attempting to kill them using the basic attack will physically age you. 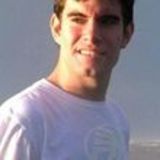