Orlando Sentinel article about Sanctuary at the Orlando Musuem of Art 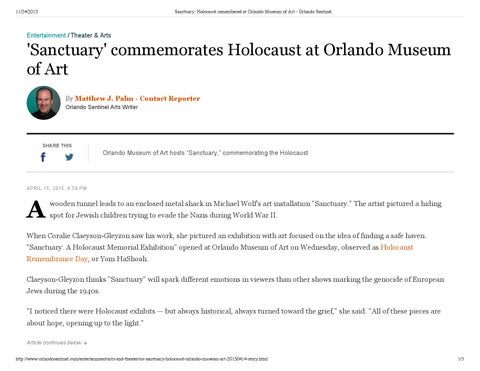 When Coralie Claeyson-Gleyzon saw his work, she pictured an exhibition with art focused on the idea of finding a safe haven. &quot;Sanctuary: A Holocaust Memorial Exhibition&quot; opened at Orlando Museum of Art on Wednesday, observed as Holocaust Remembrance Day, or Yom HaShoah. Claeyson-Gleyzon thinks &quot;Sanctuary&quot; will spark different emotions in viewers than other shows marking the genocide of European Jews during the 1940s. &quot;I noticed there were Holocaust exhibits — but always historical, always turned toward the grief,&quot; she said. &quot;All of these pieces are about hope, opening up to the light.&quot; Article continues below

Included in the exhibition are multimedia works, photos, sculpture and video by Israeli, European and American artists. Orlando Museum of Art stepped in at the last minute to host the exhibition after the sudden closure of its intended location, downtown Orlando&#39;s Jai Gallery. &quot;To have a small, thoughtful exhibition honoring Holocaust survivors and those who perished is an important moment for us,&quot; said museum director Glen Gentele. &quot;This is an opportunity for the museum and the community to participate in remembrance.&quot; At an emotional opening ceremony Wednesday morning, Romanian-born Abraham Gold spoke about surviving the Holocaust. Gold, 89, saw his parents and siblings, including his twin brother, killed in camps during the war. He survived because his skill with machinery meant the Nazis could use him for factory work. Even so, many of his comrades disappeared, never to be seen again. &quot;I was lucky,&quot; said the Orlando resident. Gold&#39;s philosophy during his imprisonment was to live for the day and not think about tomorrow. &quot;That&#39;s how I got through,&quot; he explained. Today, he speaks to schoolchildren. His message: &quot;Don&#39;t generalize&quot; about people, and &quot;Don&#39;t hate.&quot; Claeyson-Gleyzon, who was curator at Jai Gallery, hopes the sheltering images in the &quot;Sanctuary&quot; exhibition inspire museumgoers to strive for tolerance and peace, while honoring the many who died because of prejudice and hate. &quot;People will expect to see darkness,&quot; Claeyson-Gleyson said. &quot;But what I wanted to do was step away from that. With any grief, there&#39;s a time of acceptance — but without forgetting.&quot; &#39;Sanctuary&#39; •Where: Orlando Museum of Art, 2416 N. Mills Ave., Orlando •When: 10 a.m.-4 p.m. Tuesday-Friday, noon-5 p.m. Saturday-Sunday; through April 26 http://www.orlandosentinel.com/entertainment/arts-and-theater/os-sanctuary-holocaust-orlando-museum-art-20150414-story.html

This article is related to: Museums, Holocaust Remembrance Day

Orlando Sentinel article about Sanctuary at the Orlando Musuem of Art 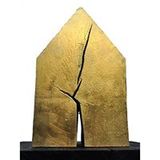