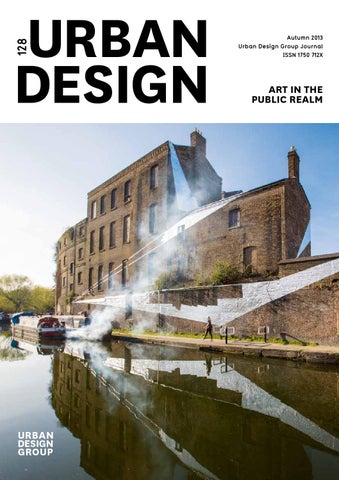 ART IN THE PUBLIC REALM

London is saturated with art. Galleries spring out of every recess. However, art that we encounter as we flow through the streets is a much rarer find. The challenges posed to artists and curators working in big cities are quite different to those presented in small and medium sized towns. Where art can kickstart a cultural agenda for smaller cities, in London it is drowned in the maelstrom of cultural activity. In this context, curation needs to be distilled, focusing on a small pool of projects that offer London something particular and distinctive. King’s Cross is a rapidly growing new slice of inner London. In under a decade it is changing from redundant warehouses, clubs, drugs and prostitutes into an intriguing mix of shiny offices and Victorian industrial buildings. Central Saint Martins College of Arts and Design, Google, Camden Council, and BNP Paribas are all taking up residence there. As the King’s Cross vacuum progressively fills, the plug has been pulled out of the dam. People and ideas are flooding in. Whilst in most towns momentum needs to be created, in King’s Cross, the torrent of creative energy is overwhelming . THE RELAY PROGRAMME The King’s Cross Central Limited Partnership, the tripartite force behind the development, employed the curators Michael Pinsky and Stephanie Delcroix to create a cohesive artistic programme for the area. Their programme RELAY opened with a nomadic work by the artist/architect Jacques Rival. He dreamt up Identified Flying Object (IFO), an oversized birdcage containing a swing which could be used by the public. The structure was designed not only to be moved, but to be hung from one of the many cranes working on the development. The suspension of the cage emphasized the dramatic shifts of scale happening on the site, from small additions of street furniture to the concrete lift cores towering overhead. The cage was first located in a desolate part of the site surrounded by construction work. Its rotating rainbow of light acted as beacon drawing in passersby, and the

swing brought a surprisingly playful and human element to the industrial scale of the development. IFO sat on Goods Way. This street, which was epitomised in Neil Jordan’s Mona Lisa by pimps and prostitutes, was transformed into a space where children and adults alike could take turns on the swing and gently absorb their new surroundings. The artist Richard Wentworth has lived for decades around King’s Cross and his ongoing series of photographs Making Do and Getting By often focus on this area. Just over ten years before any visible redevelopment, he took over the defunct General Plumbing Supplies site to create an installation called An Area of Outstanding Unnatural Beauty, dominated by a series of pingpong tables marked with street names from King’s Cross. For this reason it seemed to be entirely appropriate to invite Richard to consider the site again, now the development was well underway. Richard Wentworth then collaborated with the young Swiss architectural practice GRUPPE to create Black Maria. They occupied the immense atrium which conjoins the historical Granary Building and the new Central St Martins College designed by Stanton Williams. Though in many ways the space feels like the Tate Modern’s turbine hall, in practice it functions more like a town square. Black Maria was not only a temporary structure in which an auditorium was embedded within a vast billboard-like structure, but it also hosted a multitude of events. As such, the nature of this installation probed every complexity of the site: where can you make things? How much noise can you make? Who owns the space? Who insures the space? How do you switch the lights off? How do you keep warm?... In almost every case, this was first time that these questions had been asked and answers needed to be found. At the most fundamental level it tested the flexibility of the space both in terms of the architecture and in terms of its management. Interesting spaces are not only visually engaging, but also allow the unexpected and the unusual to happen. Black Maria pushed

↑ Felice Varini’s Across the Buildings applied aluminium tape to many different building facades. All photographs by John Sturrock

Topic site is being managed by one developer. Although there are many occupiers, including Central St Martins, Argent, Arts Fund and Waitrose, they all lease their premises from the King’s Cross partnership. Felice Varini projected geometric forms at night using a very large and antiquated PIGI projector which worked as an incredibly powerful overhead projector. He then marked out the projected shapes in pencil and filled in the spaces with silver foil. The process was laborious and painstaking but the results are truly remarkable.

The construction process of development needs to bring a positive value to the area. People find the activity of building itself fascinating and exhilarating

these boundaries, laying the foundation for future possibilities. Spanning the entire site north of Regent’s Canal, Felice Varini’s Across the Buildings uses a significant part of the King’s Cross development as its canvas. Although Varini has undertaken some modest commissions in England, the scale of this work is unprecedented. Gaining permission to apply aluminum tape to so many different building facades was only possible because the whole of the

THE PRODUCTION PROCESS The commissions reflect the dynamism of the construction in King’s Cross. Since the development will take a generation to complete, the planners need to be acutely aware of not just the final scheme but how King’s Cross comes into being. The construction process of the development needs to bring a positive value to the area. People find the activity of building itself, fascinating and exhilarating. Likewise the commissions’ production processes have been visible to the public, taking on a performance quality. With the Richard Wentworth project, wood was brought to the site and GRUPPE constructed Black Maria over the period of a month. For students coming into Central St Martins daily, the growing structure engendered a sense of anticipation as they saw how the structure was cut and assembled. Again with Across the Buildings, both the night-time projection and the gradual application of tape to the buildings suggested a large-scale choreographed dance using cranes and cherry pickers. Unlike a gallery where the work is revealed at the opening, the production process needs to be considered from when the first materials appear in-situ. Artworks located in the public realm need to create their own conceptual and aesthetic space in which the work can be placed, an in-betweenness that removes the viewer from the everyday: Rival’s swing is framed by the birdcage creating a zone of playfulness more akin to fairy tales than building sites; Varini’s geometries, when seen in alignment appear to float off the buildings into an immeasurable third plane, hovering as if a winged origami form, between the viewer and the cityscape; while Wentworth’s auditorium, framed and supported by plywood panels and timber scaffold, suspends the audience in a space that hangs between being observed and observing. PLUNGE This in-betweenness was also explored in Michael Pinsky’s public intervention Plunge which encircled a number of London’s historical monuments with an illuminated blue ring, showing the predicted sea level in 3111. At one level, Plunge extended an imaginary line from monument to monument

Topic across central London, placing the viewer deep below the water’s surface; at another level the illumination suggested a protective shell proposing that we still have the chance to change this predicament. CREATING THE JOINTS Like the King’s Cross commissions, Plunge functions both as an individual sculpture and as a network. IFO joins together locations, Black Maria joins together communities, Across the Buildings joins together architecture and Plunge joins together topography. This practice of joining the dots is really at the heart of London’s political structure, for although the visitor experiences London as a cohesive whole, it really does not function as a city at all. Rather it is a medley of squabbling villages. Plunge was exposed to the full ebb and flow of this bureaucratic dynamic. Each monument was in a different council area with one – Nelson’s Column – under the jurisdiction of the Greater London Assembly. There were many technical challenges in mounting and providing power to the rings whilst demonstrating that there would be no lasting impact on the structure of the columns. Yet these problems

proved to be much easier to surmount than the political manoeuverings which were necessary to gain permission for such an installation. Some councils like Camden were surprisingly easy to deal with;Westminster was more difficult but accessible and finally persuadable, whilst the City Corporation’s bureaucracy was utterly impenetrable. This is the real London dilemma – how to create a big fish in the big pond – when in fact the big pond is just a series of interconnecting small ponds.

Michael Pinsky, a British artist who explores the issues that shape and influence the use of our public realm in the role of artist/ urban planner/ activist/ researcher and resident. Relay: www.kingscross. co.uk/relay-and-the-kingscross-curators Plunge: plungelondon.com

BRINGING ART TO THE PUBLIC REALM

Graham Roberts and Andrew Knight explain the contribution of the consultant to the process In his seminal 1985 essay How Art Becomes Public, Jerry Allen observed ’...the very notion of a ‘public art’ is something of a contradiction in terms. In it we join two words whose meanings are, in some ways, antithetical. We recognise ‘art’ in the 20th century as the individual enquiry of the sculptor or painter, the epitome of self-assertion. To that we join ‘public’, a reference to the collective, the social order, self-negation. Hence we link the private and the public, in a single concept or object, from which we expect both coherence and integrity. This is no idle or curious problem but is central to an issue that has plagued public art in modern times: the estrangement of the public for whose benefit the artwork has been placed’. The then Director of Cultural Affairs for the City of Dallas, Jerry Allen went on to provide a postmodern qualification for public art, i.e. it must serve a socio-environmental function: public art must be made first and foremost for the people, rather than for the aggrandisement of the artist or the commissioner, otherwise it is just private art. Artists are well placed to contribute to the design and social processes employed in restoring life to degraded spaces and creating new ones. Through their lateral thinking and approach to looking at things differently, they are capable of finding, Issue 128 – Autumn 2013 – Urban Design — 13

A review of the RELAY arts commissions in King's Cross, London