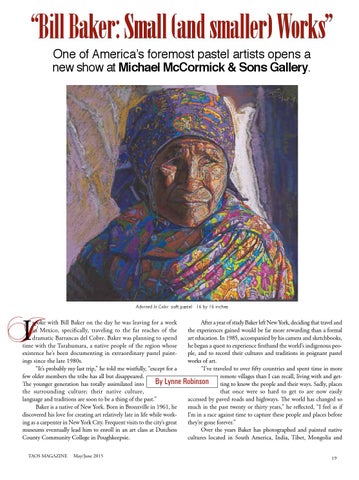 spoke with Bill Baker on the day he was leaving for a week After a year of study Baker left New York, deciding that travel and in Mexico, specifically, traveling to the far reaches of the the experiences gained would be far more rewarding than a formal dramatic Barrancas del Cobre. Baker was planning to spend art education. In 1985, accompanied by his camera and sketchbooks, time with the Tarahumara, a native people of the region whose he began a quest to experience firsthand the world’s indigenous peoexistence he’s been documenting in extraordinary pastel paintple, and to record their cultures and traditions in poignant pastel ings since the late 1980s. works of art. “It’s probably my last trip,” he told me wistfully, “except for a “I’ve traveled to over fifty countries and spent time in more few older members the tribe has all but disappeared. remote villages than I can recall, living with and getBy Lynne Robinson ting to know the people and their ways. Sadly, places The younger generation has totally assimilated into the surrounding culture; their native culture, that once were so hard to get to are now easily language and traditions are soon to be a thing of the past.” accessed by paved roads and highways. The world has changed so Baker is a native of New York. Born in Bronxville in 1961, he much in the past twenty or thirty years,” he reflected, “I feel as if discovered his love for creating art relatively late in life while workI’m in a race against time to capture these people and places before ing as a carpenter in New York City. Frequent visits to the city’s great they’re gone forever.” museums eventually lead him to enroll in an art class at Dutchess Over the years Baker has photographed and painted native County Community College in Poughkeepsie. cultures located in South America, India, Tibet, Mongolia and TAOS MAGAZINE

Africa, but it’s his paintings of northern Mexico’s Tarahumara Indians for which he has become most recognized. His acclaimed body of work is an important historical documentation of cultures others will never experience, and after nearly three decades of constant travel he continues to record and share his discoveries. Noted for large-scale paintings, this summer Baker will unveil a collection of smaller works at Michael McCormick & Sons Gallery. Masterful technique, and his play of light and shadow combined with a fearless use of color and a deep understanding and respect for the people he paints, provides his work a singular edge. This is expressionism at its best with an element of surprise thrown into the mix. Whether it’s an expression he captures on a timeworn face, the gesture of a hand, the hem of a dress, Baker identifies with people struggling to survive as the world encroaches on their vanishing ways of life. In a Baker painting one can almost feel the woven and embroidered garments worn by his subjects, so powerfully does he render the texture and nuance of the moment he’s chosen to freeze in time. The smaller works he will be introducing at the McCormick exhibition promise to be as exacting in their detail as Baker’s more formidable pieces. He admitted, though, that the process has been an artistic challenge. “It’s quite difficult to do what I do in a smaller scale, the pastels I use are far more difficult to manage in miniature dimensions than a brush. These paintings are very small, ranging from four by four inches to ten by ten inches. The portraits I’m doing for the show are eighteen by thirteen inches, smaller than the usual sizes I work with for that type of subject matter.”

An exhibition of small works, created by an internationally recognized artist whose reputation has been earned through paintings on a much larger scale, provides a real opportunity for those in the beginning stages of collecting. For established collectors in the throes of downsizing, this is a chance to add a work by one of America’s most prestigious pastel artists that can be exhibited nicely in a smaller space. Baker has long been a major draw at the McCormick gallery. The work regularly shown there fills an expansive space, and viewers can’t help but be struck by the deeper message Baker conveys. The poignancy portrayed is palpable; they are images lamenting the loss of once vital and vibrant societies. As I continued my conversation with Baker, I could hear an unmistakable sadness in his voice as he reiterated that this trip would probably be his last. “I hope to find some of the older members of the tribe who are still around,” he said somberly, “with any luck there will be a few still wearing traditional clothing.” What I know for sure is that Bill Baker will be equipped with his camera and sketchbooks, just as he was thirty years ago, to capture in his unique style dramatic images that will preserve the stories of a rapidly disappearing culture. Noted for large-scale paintings, this summer Baker will unveil a collection of smaller works at Michael McCormick & Sons Gallery. Masterful...

Noted for large-scale paintings, this summer Baker will unveil a collection of smaller works at Michael McCormick & Sons Gallery. Masterful...