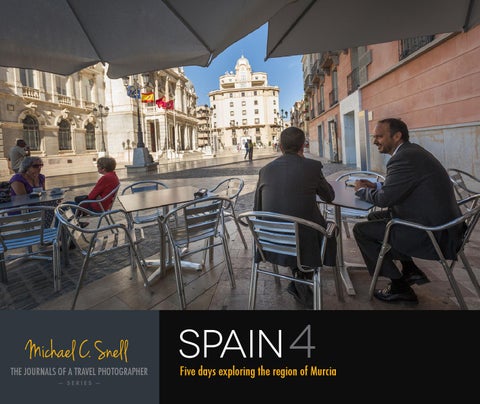 THE JOURNALS OF A TRAVEL PHOTOGRAPHER — SERIES —

THE JOURNALS OF A TRAVEL PHOTOGRAPHER SERIES

Michael C. Snell is a travel photographer based in Lawrence, Kansas. His images have been published in numerous travel guides, magazines, books and websites worldwide. Michael says, “Travel photography is about capturing what is unique about a place through images of its people, architecture, landscape, food and other details that are telling of the culture.” He shoots on assignment and also licenses stock images through a variety of agencies and outlets.

Each book in the “Journals of a Travel Photographer” Series

looks at one specific photo-gathering trip Michael has made. Some of these trips were of his own making, scheduled specifically to be at the right place at the right time for best light. In other cases, they were press trips arranged for groups of journalists— largely comprised of writers. That type of trip can be challenging to a photographer as they tend to be tightly scheduled with little time at any given location. The trips are intended as introductions or overviews to a place the journalist might not already be familiar with.

Similarly, these books are not intended to be complete, in-depth

studies of a place or culture. Instead, they are a record of a brief journey—an opportunity for the rest of us to “ride along” and experience life as a professional photographer working on location.

To learn more about Michael, his photos, or other books in this series, visit his website at michaelcsnell.com.

Moorish influences abound in Murcia. This highly decorated wall and niche were found in the Casino de Murcia in the city of Murcia.

Murcia, Spain, was unknown to me before visiting in the fall of 2014. It’s a fairly common tourist destination for Europeans, but it hadn’t made much of a blip on the radar of this American traveler. As I researched the region, I learned the reason that the more northern Europeans were drawn there — sun. Costa Calida, or “the warm coast,” gets more than 3000 hours of sunshine a year so the calm waters of Mar Menor are a year-round destination. Further inland, the land becomes more arid yet boasts historic cities, castles and Roman ruins. My route would encompass a little of everything, beginning in Lorca with its looming medieval castle, continuing on to Mar Menor to see a bit of that beach culture, then on to Cartagena and Murcia — two cities with a wealth of beautiful architecture and cultural attractions. There would be a bit of everything, packed into the short timeframe of just five days. In the following pages you’ll see what I discovered as I explored this place that deserves to be better known to more Americans. I hope you enjoy my photos and are inspired to visit the region of Murcia for yourself one day.

I stayed at the Parador de Lorca on my first night in the region of Murcia. The commanding views from its mountaintop setting provided a good overview of the ruggedly beautiful area.

©2015 Michael C. Snell, all rights reserved. Michael C. Snell Photography is a division of Shade of the Cottonwood, L.L.C., a creative services company based in Lawrence, KS.

I arrived in Lorca and spent two nights in a new Parador that is located within a medieval castle complex that sits on a mountain far above the city, providing excellent views of Lorca and the surrounding landscape.

Lorca Castle was constructed largely during the 13th century and occupied a commanding postion over the surrounding plains.

The Parador de Lorca was constructed within the walls of the old castle and incorporates excavated foundations and walls into its design.

The view from the castleâ&amp;#x20AC;&amp;#x2122;s AlfonsĂ­ Tower makes a great introduction to this historic region of Spain.

From the Parador, itâ&amp;#x20AC;&amp;#x2122;s a short walk to the museum portion of Lorca Castle.

The AlfonsĂ­ Tower was rebuilt in the 15th century with Gothic vaulted ceilings.

The incredible brickwork of the vaulted ceilings of the AlfonsĂ­ Tower.

The Espol贸n Tower of Lorca Castle.

Throughout the castle and Parador grounds there are stunning views out over the city of Lorca. The older parts of the city are tightly packed amidst crooked streets, a patchwork of tile and metal roofs when viewed from above.

Itâ&amp;#x20AC;&amp;#x2122;s definitely worth coming down from the castle to explore the city of Lorca as well. The old section of town provides endless opportunities for wandering narrow streets and admiring the architecture â&amp;#x20AC;&amp;#x201D; fairly restrained here and more ornate on the following pages.

A street performer entertains a group of children (left) and a woman walks along one of the many narrow streets in the old section of Lorca (above).

The Chapel of the Rosary inside the Church of Santo Domingo is absolutely stunning, as is the embroidery museum next door that showcases some of the elaborate robes that are used during Lorcaâ&amp;#x20AC;&amp;#x2122;s processions.

Night falls on the Plaza Calderón de la Barca with the Guerra Theater — the oldest theater in the region of Murcia — in the background.

Just enough time for one last snack at Pastelerias Zenon before getting packed and ready to move on to the next town in the morning.

The Mar Menor, or â&amp;#x20AC;&amp;#x153;Minor Sea,â&amp;#x20AC;? is a popular spot for enjoying the outdoors. A salty lagoon only barely separated from the Mediterranean Sea, Mar Menor offers calm waters and abundant sunshine.

San Pedro del Pinatar is a communtiy situated at the northnern end of Mar Menor. This aging windmill is a local landmark.

The muds in this part of the Mar Menor are said to have many health benefits. Special stations are set up along one long causeway where people can coat themselves with it and bake in the sun.

The promenade along Calle Campoamor in San Pedro del Pinatar.

The marina and distant mountains, as seen from the beach along Calle Campoamor.

You can take a shortcut and cross the Mar Menor by ferry to get to La Manga â&amp;#x20AC;&amp;#x201D; that narrow spit of land that separates the lagoon from the Mediterranean Sea.

In some places La Manga is just wide enough for a road with hotels on either side. In others, there is only room for hotels on one side of the road. Itâ&amp;#x20AC;&amp;#x2122;s a great location for watching sunrises over the Mediterranean and sunsets over Mar Menor.

Faro Cabo de Palos on the Mediterranean, looking back at the hotels lining La Manga. Mar Menor lies behind the distant hotels.

My lodgings for the night were at the luxurious InterContinental Mar Menor Golf Resort &amp; Spa. I arrived just in time to photograph the pool and surroundings as the sun set.

The resort is surrounded by a beautiful planned community with a unique architectural aesthetic.

Called â&amp;#x20AC;&amp;#x153;New Carthageâ&amp;#x20AC;? during the Roman Empire, the city now known as Cartagena is beautifully situated on the Mediterranean, nestled between mountains.

Originally built between 5 and 1 BC, the Roman Theater ruins were only recently re-discovered and excavated in the middle of the city.

A museum, designed by Rafael Moneo, opened in 2008 to display some of the artifacts found during the reconstruction of the Roman theater.

In stark contrast to the plentiful historic architecture of Cartagena, El Batel Conference Center and Auditorium is a triumph of modern design. Its rooftop restaurant overlooks the harbor.

My last stop would be in Murcia, the capital and most populous city in this region of the same name. next pages :

It was a bit disorienting to see this view from my hotel window at dawn. No, I wasnâ&amp;#x20AC;&amp;#x2122;t in Rio, this is a similar Christ statue at Monteagudo castle.

The Cathedral of Murcia, on the Plaza del Cardenal Belluga.

A beautiful plastered wall treatment on a building in the old quarter of Murcia.

The casino was—and is— a gentlemen’s club where the upper class of Cartagena’s men could gather to dine, play pool or discuss the day’s events.

Many portions of the Casino of Murcia are now open to the public and have been beautifully restored.

Art fills the Casino of Murcia. Not even the ceilings are overlooked.

While away the day discussing politics on a leather sofa or over a game of pool (a version Iâ&amp;#x20AC;&amp;#x2122;d not seen before where there are no pockets!).

Back on the streets of Murcia and exploring the markets.

A musician serenades as people gather for tapas at the many street cafes of Murcia, Spain.

THE JOURNALS OF A TRAVEL PHOTOGRAPHER SERIES

The following is a list of the equipment I took with me on this trip and that produced all of the photos in this book. All images were RAW captures, processed in Adobe Lightroom CC 2015. The book itself was designed in Adobe InDesign CC 2015 and printed using Blurb.com. camera bodies :

Thanks to the Tourist Office of Spain in Chicago, Destino Región de Murcia (Murcia Regional Tourist Board), Paradores de Turismo, Iberia Airlines, and everyone else who worked so hard to make this trip such a success. The region of Murcia is incredible and I hope the photographs in this book will encourage more people to visit and explore for themselves. To learn more about Michael C. Snell’s photography, or to find out about other books in this series, visit michaelcsnell.com

MURCIA, SPAIN, was unknown to me before visiting in the fall of 2014. It’s a fairly common tourist destination for Europeans, but it hadn’t made much of a blip on the radar of this American traveler. As I researched the region, I learned the reason that the more northern Europeans were drawn there—sun. Costa Calida, or “the warm coast,” gets more than 3000 hours of sunshine a year so the calm waters of Mar Menor are a year-round destination.

historic cities, castles and Roman ruins. My route would encompass a little of everything, beginning in Lorca with its looming medieval castle, continuing on to Mar Menor to see a bit of that beach culture, then on to Cartagena and Murcia — two cities with a wealth of beautiful architecture and cultural attractions. ABOUT THE AUTHOR: Michael C. Snell is a travel photographer based in Lawrence, Kansas. Shooting on assignment and for stock, his images have appeared worldwide in a variety of travel guides, magazines, websites, brochures and books. He is a photographer member of the Society of American Travel Writers. ABOUT THE SERIES: In this series of books, Michael shares images he made during his photographic travels along with behind-the-scenes notes on their capture. The images are arranged more or less chronologically, recording the images that were made day by day and giving some small insight into what life can be like when you’re on the road, and working. It’s only glamorous some of the time.

©2015 Michael C. Snell, all rights reserved. Michael C. Snell Photography is a division of Shade of the Cottonwood, L.L.C., a creative services company based in Lawrence, Kansas.

A photo journal of images made by professional travel photographer Michael C. Snell during a five-day trip to the Murcia region of Spain in 2014. 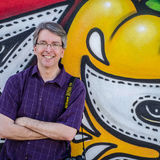