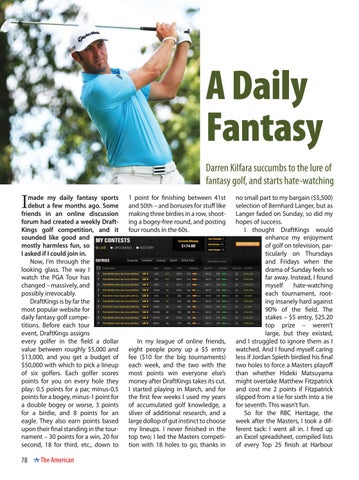 A Daily Fantasy Darren Kilfara succumbs to the lure of fantasy golf, and starts hate-watching

made my daily fantasy sports debut a few months ago. Some friends in an online discussion forum had created a weekly DraftKings golf competition, and it sounded like good and mostly harmless fun, so I asked if I could join in. Now, I’m through the looking glass. The way I watch the PGA Tour has changed – massively, and possibly irrevocably. DraftKings is by far the most popular website for daily fantasy golf competitions. Before each tour event, DraftKings assigns every golfer in the field a dollar value between roughly $5,000 and $13,000, and you get a budget of $50,000 with which to pick a lineup of six golfers. Each golfer scores points for you on every hole they play: 0.5 points for a par, minus-0.5 points for a bogey, minus-1 point for a double bogey or worse, 3 points for a birdie, and 8 points for an eagle. They also earn points based upon their final standing in the tournament – 30 points for a win, 20 for second, 18 for third, etc., down to

1 point for finishing between 41st and 50th – and bonuses for stuff like making three birdies in a row, shooting a bogey-free round, and posting four rounds in the 60s.

In my league of online friends, eight people pony up a $5 entry fee ($10 for the big tournaments) each week, and the two with the most points win everyone else’s money after DraftKings takes its cut. I started playing in March, and for the first few weeks I used my years of accumulated golf knowledge, a sliver of additional research, and a large dollop of gut instinct to choose my lineups. I never finished in the top two; I led the Masters competition with 18 holes to go, thanks in

no small part to my bargain ($5,500) selection of Bernhard Langer, but as Langer faded on Sunday, so did my hopes of success. I thought DraftKings would enhance my enjoyment of golf on television, particularly on Thursdays and Fridays when the drama of Sunday feels so far away. Instead, I found myself hate-watching each tournament, rooting insanely hard against 90% of the field. The stakes – $5 entry, $25.20 top prize – weren’t large, but they existed, and I struggled to ignore them as I watched. And I found myself caring less if Jordan Spieth birdied his final two holes to force a Masters playoff than whether Hideki Matsuyama might overtake Matthew Fitzpatrick and cost me 2 points if Fitzpatrick slipped from a tie for sixth into a tie for seventh. This wasn’t fun. So for the RBC Heritage, the week after the Masters, I took a different tack: I went all in. I fired up an Excel spreadsheet, compiled lists of every Top 25 finish at Harbour