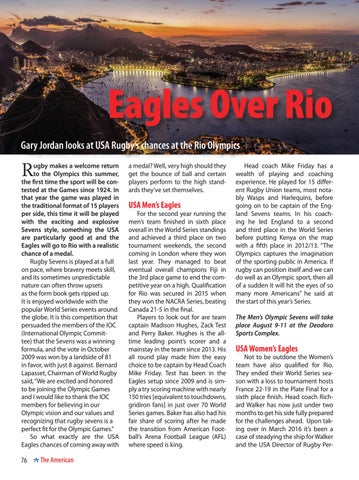 ugby makes a welcome return to the Olympics this summer, the first time the sport will be contested at the Games since 1924. In that year the game was played in the traditional format of 15 players per side, this time it will be played with the exciting and explosive Sevens style, something the USA are particularly good at and the Eagles will go to Rio with a realistic chance of a medal. Rugby Sevens is played at a full on pace, where bravery meets skill, and its sometimes unpredictable nature can often throw upsets as the form book gets ripped up. It is enjoyed worldwide with the popular World Series events around the globe. It is this competition that persuaded the members of the IOC (International Olympic Committee) that the Sevens was a winning formula, and the vote in October 2009 was won by a landside of 81 in favor, with just 8 against. Bernard Lapasset, Chairman of World Rugby said, “We are excited and honored to be joining the Olympic Games and I would like to thank the IOC members for believing in our Olympic vision and our values and recognizing that rugby sevens is a perfect fit for the Olympic Games.” So what exactly are the USA Eagles chances of coming away with

a medal? Well, very high should they get the bounce of ball and certain players perform to the high standards they’ve set themselves.

For the second year running the men’s team finished in sixth place overall in the World Series standings and achieved a third place on two tournament weekends, the second coming in London where they won last year. They managed to beat eventual overall champions Fiji in the 3rd place game to end the competitive year on a high. Qualification for Rio was secured in 2015 when they won the NACRA Series, beating Canada 21-5 in the final. Players to look out for are team captain Madison Hughes, Zack Test and Perry Baker. Hughes is the alltime leading point’s scorer and a mainstay in the team since 2013. His all round play made him the easy choice to be captain by Head Coach Mike Friday. Test has been in the Eagles setup since 2009 and is simply a try scoring machine with nearly 150 tries [equivalent to touchdowns, gridiron fans] in just over 70 World Series games. Baker has also had his fair share of scoring after he made the transition from American Football’s Arena Football League (AFL) where speed is king.

Head coach Mike Friday has a wealth of playing and coaching experience. He played for 15 different Rugby Union teams, most notably Wasps and Harlequins, before going on to be captain of the England Sevens teams. In his coaching he led England to a second and third place in the World Series before putting Kenya on the map with a fifth place in 2012/13. “The Olympics captures the imagination of the sporting public in America. If rugby can position itself and we can do well as an Olympic sport, then all of a sudden it will hit the eyes of so many more Americans” he said at the start of this year’s Series. The Men’s Olympic Sevens will take place August 9-11 at the Deodoro Sports Complex.

Not to be outdone the Women’s team have also qualified for Rio. They ended their World Series season with a loss to tournament hosts France 22-19 in the Plate Final for a sixth place finish. Head coach Richard Walker has now just under two months to get his side fully prepared for the challenges ahead. Upon taking over in March 2016 it’s been a case of steadying the ship for Walker and the USA Director of Rugby Per-