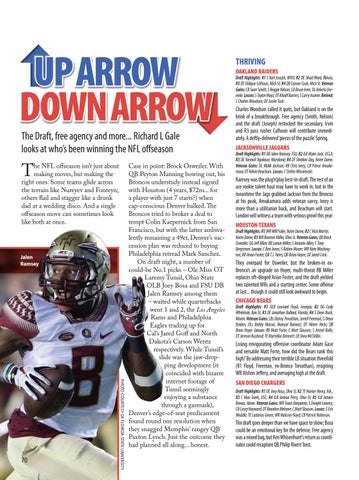 he NFL offseason isn’t just about making moves, but making the right ones. Some teams glide across the terrain like Nureyev and Fonteyn; others flail and stagger like a drunk dad at a wedding disco. And a single offseason move can sometimes look like both at once.

Case in point: Brock Osweiler. With QB Peyton Manning bowing out, his Broncos understudy instead signed with Houston (4 years, $72m... for a player with just 7 starts?) when cap-conscious Denver balked. The Broncos tried to broker a deal to tempt Colin Kaepernick from San Francisco, but with the latter ambivalently remaining a 49er, Denver’s succession plan was reduced to buying Philadelphia retread Mark Sanchez. On draft night, a number of could-be No.1 picks – Ole Miss OT Laremy Tunsil, Ohio State OLB Joey Bosa and FSU DB Jalen Ramsey among them – waited while quarterbacks went 1 and 2, the Los Angeles Rams and Philadelphia Eagles trading up for Cal’s Jared Goff and North Dakota’s Carson Wentz respectively. While Tunsil’s slide was the jaw-dropping development (it coincided with bizarre internet footage of Tunsil seemingly enjoying a substance through a gasmask), Denver’s edge-of-seat predicament found round one resolution when they snagged Memphis’ rangey QB Paxton Lynch. Just the outcome they had planned all along... honest.

They overpaid for Osweiler, but the broken-in exBronco’s an upgrade on Hoyer, multi-threat RB Miller replaces oft-dinged Arian Foster, and the draft yielded two talented WRs and a starting center. Some offense at last... though it could still look awkward to begin. CHICAGO BEARS

The draft goes deeper than we have space to show; Bosa could be an emotional key for the defense. Free agency was a mixed bag, but Ken Whisenhunt’s return as coordinator could recapture QB Philip Rivers’ best.