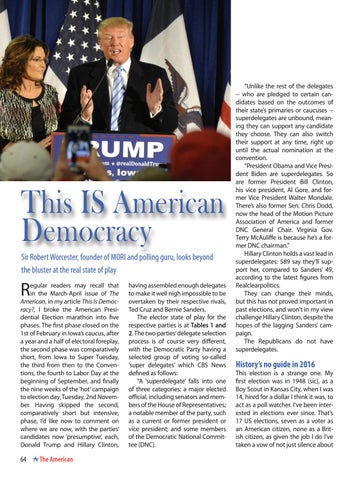 This IS American Democracy Sir Robert Worcester, founder of MORI and polling guru, looks beyond the bluster at the real state of play

egular readers may recall that in the March-April issue of The American, in my article This Is Democracy?, I broke the American Presidential Election marathon into five phases. The first phase closed on the 1st of February in Iowa’s caucus, after a year and a half of electoral foreplay, the second phase was comparatively short, from Iowa to Super Tuesday, the third from then to the Conventions, the fourth to Labor Day at the beginning of September, and finally the nine weeks of the ‘hot’ campaign to election day, Tuesday, 2nd November. Having skipped the second, comparatively short but intensive, phase, I’d like now to comment on where we are now, with the parties’ candidates now ‘presumptive’, each, Donald Trump and Hillary Clinton,

having assembled enough delegates to make it well nigh impossible to be overtaken by their respective rivals, Ted Cruz and Bernie Sanders. The elector state of play for the respective parties is at Tables 1 and 2. The two parties’ delegate selection process is of course very different, with the Democratic Party having a selected group of voting so-called ‘super delegates’ which CBS News defined as follows: “A ‘superdelegate’ falls into one of three categories: a major elected official, including senators and members of the House of Representatives; a notable member of the party, such as a current or former president or vice president; and some members of the Democratic National Committee (DNC).

“Unlike the rest of the delegates -- who are pledged to certain candidates based on the outcomes of their state’s primaries or caucuses -superdelegates are unbound, meaning they can support any candidate they choose. They can also switch their support at any time, right up until the actual nomination at the convention. “President Obama and Vice President Biden are superdelegates. So are former President Bill Clinton, his vice president, Al Gore, and former Vice President Walter Mondale. There’s also former Sen. Chris Dodd, now the head of the Motion Picture Association of America and former DNC General Chair. Virginia Gov. Terry McAuliffe is because he’s a former DNC chairman.” Hillary Clinton holds a vast lead in superdelegates: 589 say they’ll support her, compared to Sanders’ 49, according to the latest figures from Realclearpolitics. They can change their minds, but this has not proved important in past elections, and won’t in my view challenge Hillary Clinton, despite the hopes of the lagging Sanders’ campaign. The Republicans do not have superdelegates.

This election is a strange one. My first election was in 1948 (sic), as a Boy Scout in Kansas City, when I was 14, hired for a dollar I think it was, to act as a poll watcher. I’ve been interested in elections ever since. That’s 17 US elections, seven as a voter as an American citizen, none as a British citizen, as given the job I do I’ve taken a vow of not just silence about