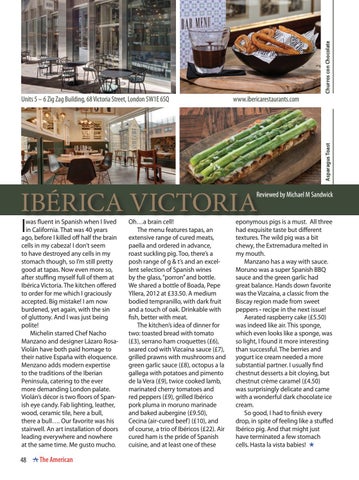 was fluent in Spanish when I lived in California. That was 40 years ago, before I killed off half the brain cells in my cabeza! I don’t seem to have destroyed any cells in my stomach though, so I’m still pretty good at tapas. Now even more so, after stuffing myself full of them at Ibérica Victoria. The kitchen offered to order for me which I graciously accepted. Big mistake! I am now burdened, yet again, with the sin of gluttony. And I was just being polite! Michelin starred Chef Nacho Manzano and designer Lázaro RosaViolán have both paid homage to their native España with eloquence. Menzano adds modern expertise to the traditions of the Iberian Peninsula, catering to the ever more demanding London palate. Violán’s décor is two floors of Spanish eye candy. Fab lighting, leather, wood, ceramic tile, here a bull, there a bull…. Our favorite was his stairwell. An art installation of doors leading everywhere and nowhere at the same time. Me gusto mucho.

Oh…a brain cell! The menu features tapas, an extensive range of cured meats, paella and ordered in advance, roast suckling pig. Too, there’s a posh range of g & t’s and an excellent selection of Spanish wines by the glass, “porron” and bottle. We shared a bottle of Boada, Pepe Yllera, 2012 at £33.50. A medium bodied tempranillo, with dark fruit and a touch of oak. Drinkable with fish, better with meat. The kitchen’s idea of dinner for two: toasted bread with tomato (£3), serrano ham croquettes (£6), seared cod with Vizcaína sauce (£7), grilled prawns with mushrooms and green garlic sauce (£8), octopus a la gallega with potatoes and pimento de la Vera (£9), twice cooked lamb, marinated cherry tomatoes and red peppers (£9), grilled Ibérico pork pluma in moruno marinade and baked aubergine (£9.50), Cecina (air-cured beef) (£10), and of course, a trio of Ibéricos (£22). Air cured ham is the pride of Spanish cuisine, and at least one of these

eponymous pigs is a must. All three had exquisite taste but different textures. The wild pig was a bit chewy, the Extremadura melted in my mouth. Manzano has a way with sauce. Moruno was a super Spanish BBQ sauce and the green garlic had great balance. Hands down favorite was the Vizcaína, a classic from the Biscay region made from sweet peppers - recipe in the next issue! Aerated raspberry cake (£5.50) was indeed like air. This sponge, which even looks like a sponge, was so light, I found it more interesting than successful. The berries and yogurt ice cream needed a more substantial partner. I usually find chestnut desserts a bit cloying, but chestnut crème caramel (£4.50) was surprisingly delicate and came with a wonderful dark chocolate ice cream. So good, I had to finish every drop, in spite of feeling like a stuffed Ibérico pig. And that might just have terminated a few stomach cells. Hasta la vista babies!