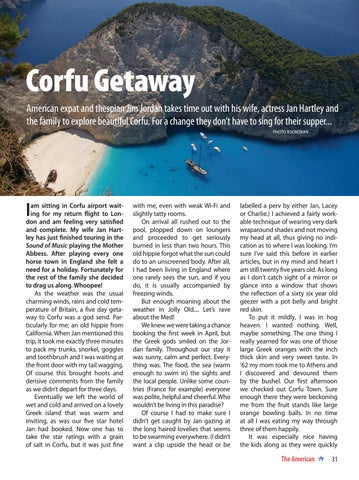 Corfu Getaway American expat and thespian Jim Jordan takes time out with his wife, actress Jan Hartley and the family to explore beautiful Corfu. For a change they don’t have to sing for their supper... PHOTO ©SOKOBAN

am sitting in Corfu airport waiting for my return flight to London and am feeling very satisfied and complete. My wife Jan Hartley has just finished touring in the Sound of Music playing the Mother Abbess. After playing every one horse town in England she felt a need for a holiday. Fortunately for the rest of the family she decided to drag us along. Whoopee! As the weather was the usual charming winds, rains and cold temperature of Britain, a five day getaway to Corfu was a god send. Particularly for me; an old hippie from California. When Jan mentioned this trip, it took me exactly three minutes to pack my trunks, snorkel, goggles and toothbrush and I was waiting at the front door with my tail wagging. Of course this brought hoots and derisive comments from the family as we didn’t depart for three days. Eventually we left the world of wet and cold and arrived on a lovely Greek island that was warm and inviting, as was our five star hotel Jan had booked. Now one has to take the star ratings with a grain of salt in Corfu, but it was just fine

with me, even with weak Wi-Fi and slightly tatty rooms. On arrival all rushed out to the pool, plopped down on loungers and proceeded to get seriously burned in less than two hours. This old hippie forgot what the sun could do to an unscreened body. After all, I had been living in England where one rarely sees the sun, and if you do, it is usually accompanied by freezing winds. But enough moaning about the weather in Jolly Old.... Let’s rave about the Med! We knew we were taking a chance booking the first week in April, but the Greek gods smiled on the Jordan family. Throughout our stay it was sunny, calm and perfect. Everything was. The food, the sea (warm enough to swim in) the sights and the local people. Unlike some countries (France for example) everyone was polite, helpful and cheerful. Who wouldn’t be living in this paradise? Of course I had to make sure I didn’t get caught by Jan gazing at the long haired lovelies that seems to be swarming everywhere. (I didn’t want a clip upside the head or be

labelled a perv by either Jan, Lacey or Charlie.) I achieved a fairly workable technique of wearing very dark wraparound shades and not moving my head at all, thus giving no indication as to where I was looking. I’m sure I’ve said this before in earlier articles, but in my mind and heart I am still twenty five years old. As long as I don’t catch sight of a mirror or glance into a window that shows the reflection of a sixty six year old geezer with a pot belly and bright red skin. To put it mildly, I was in hog heaven. I wanted nothing. Well, maybe something. The one thing I really yearned for was one of those large Greek oranges with the inch thick skin and very sweet taste. In ‘62 my mom took me to Athens and I discovered and devoured them by the bushel. Our first afternoon we checked out Corfu Town. Sure enough there they were beckoning me from the fruit stands like large orange bowling balls. In no time at all I was eating my way through three of them happily. It was especially nice having the kids along as they were quickly