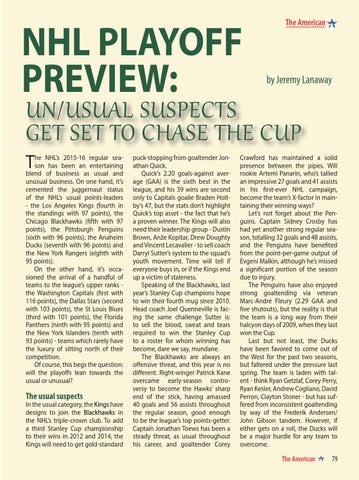 UN/USUAL SUSPECTS GET SET TO CHASE THE CUP T

he NHL’s 2015-16 regular season has been an entertaining blend of business as usual and unusual business. On one hand, it’s cemented the juggernaut status of the NHL’s usual points-leaders - the Los Angeles Kings (fourth in the standings with 97 points), the Chicago Blackhawks (fifth with 97 points), the Pittsburgh Penguins (sixth with 96 points), the Anaheim Ducks (seventh with 96 points) and the New York Rangers (eighth with 95 points). On the other hand, it’s occasioned the arrival of a handful of teams to the league’s upper ranks the Washington Capitals (first with 116 points), the Dallas Stars (second with 103 points), the St Louis Blues (third with 101 points), the Florida Panthers (ninth with 95 points) and the New York Islanders (tenth with 93 points) - teams which rarely have the luxury of sitting north of their competition. Of course, this begs the question: will the playoffs lean towards the usual or unusual?

In the usual category, the Kings have designs to join the Blackhawks in the NHL’s triple-crown club. To add a third Stanley Cup championship to their wins in 2012 and 2014, the Kings will need to get gold-standard

puck-stopping from goaltender Jonathan Quick. Quick’s 2.20 goals-against average (GAA) is the sixth best in the league, and his 39 wins are second only to Capitals goalie Braden Holtby’s 47, but the stats don’t highlight Quick’s top asset - the fact that he’s a proven winner. The Kings will also need their leadership group - Dustin Brown, Anže Kopitar, Drew Doughty and Vincent Lecavalier - to sell coach Darryl Sutter’s system to the squad’s youth movement. Time will tell if everyone buys in, or if the Kings end up a victim of staleness. Speaking of the Blackhawks, last year’s Stanley Cup champions hope to win their fourth mug since 2010. Head coach Joel Quenneville is facing the same challenge Sutter is: to sell the blood, sweat and tears required to win the Stanley Cup to a roster for whom winning has become, dare we say, mundane. The Blackhawks are always an offensive threat, and this year is no different. Right-winger Patrick Kane overcame early-season controversy to become the Hawks’ sharp end of the stick, having amassed 40 goals and 56 assists throughout the regular season, good enough to be the league’s top points-getter. Captain Jonathan Toews has been a steady threat, as usual throughout his career, and goaltender Corey

Crawford has maintained a solid presence between the pipes. Will rookie Artemi Panarin, who’s tallied an impressive 27 goals and 41 assists in his first-ever NHL campaign, become the team’s X-factor in maintaining their winning ways? Let’s not forget about the Penguins. Captain Sidney Crosby has had yet another strong regular season, totalling 32 goals and 48 assists, and the Penguins have benefited from the point-per-game output of Evgeni Malkin, although he’s missed a significant portion of the season due to injury. The Penguins have also enjoyed strong goaltending via veteran Marc-André Fleury (2.29 GAA and five shutouts), but the reality is that the team is a long way from their halcyon days of 2009, when they last won the Cup. Last but not least, the Ducks have been favored to come out of the West for the past two seasons, but faltered under the pressure last spring. The team is laden with talent - think Ryan Getzlaf, Corey Perry, Ryan Kesler, Andrew Cogliano, David Perron, Clayton Stoner - but has suffered from inconsistent goaltending by way of the Frederik Andersen/ John Gibson tandem. However, if either gets on a roll, the Ducks will be a major hurdle for any team to overcome.