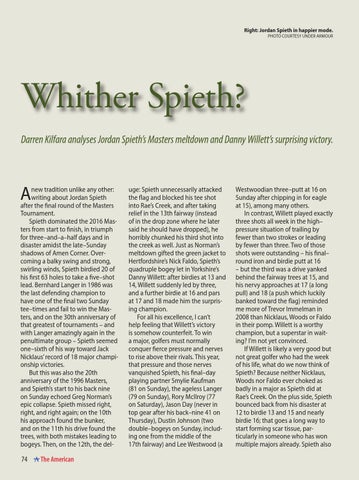 new tradition unlike any other: writing about Jordan Spieth after the final round of the Masters Tournament. Spieth dominated the 2016 Masters from start to finish, in triumph for three–and–a–half days and in disaster amidst the late–Sunday shadows of Amen Corner. Overcoming a balky swing and strong, swirling winds, Spieth birdied 20 of his first 63 holes to take a five–shot lead. Bernhard Langer in 1986 was the last defending champion to have one of the final two Sunday tee–times and fail to win the Masters, and on the 30th anniversary of that greatest of tournaments – and with Langer amazingly again in the penultimate group – Spieth seemed one–sixth of his way toward Jack Nicklaus’ record of 18 major championship victories. But this was also the 20th anniversary of the 1996 Masters, and Spieth’s start to his back nine on Sunday echoed Greg Norman’s epic collapse. Spieth missed right, right, and right again; on the 10th his approach found the bunker, and on the 11th his drive found the trees, with both mistakes leading to bogeys. Then, on the 12th, the del-

uge: Spieth unnecessarily attacked the flag and blocked his tee shot into Rae’s Creek, and after taking relief in the 13th fairway (instead of in the drop zone where he later said he should have dropped), he horribly chunked his third shot into the creek as well. Just as Norman’s meltdown gifted the green jacket to Hertfordshire’s Nick Faldo, Spieth’s quadruple bogey let in Yorkshire’s Danny Willett: after birdies at 13 and 14, Willett suddenly led by three, and a further birdie at 16 and pars at 17 and 18 made him the surprising champion. For all his excellence, I can’t help feeling that Willett’s victory is somehow counterfeit. To win a major, golfers must normally conquer fierce pressure and nerves to rise above their rivals. This year, that pressure and those nerves vanquished Spieth, his final–day playing partner Smylie Kaufman (81 on Sunday), the ageless Langer (79 on Sunday), Rory McIlroy (77 on Saturday), Jason Day (never in top gear after his back–nine 41 on Thursday), Dustin Johnson (two double–bogeys on Sunday, including one from the middle of the 17th fairway) and Lee Westwood (a

Westwoodian three–putt at 16 on Sunday after chipping in for eagle at 15), among many others. In contrast, Willett played exactly three shots all week in the high– pressure situation of trailing by fewer than two strokes or leading by fewer than three. Two of those shots were outstanding – his final– round iron and birdie putt at 16 – but the third was a drive yanked behind the fairway trees at 15, and his nervy approaches at 17 (a long pull) and 18 (a push which luckily banked toward the flag) reminded me more of Trevor Immelman in 2008 than Nicklaus, Woods or Faldo in their pomp. Willett is a worthy champion, but a superstar in waiting? I’m not yet convinced. If Willett is likely a very good but not great golfer who had the week of his life, what do we now think of Spieth? Because neither Nicklaus, Woods nor Faldo ever choked as badly in a major as Spieth did at Rae’s Creek. On the plus side, Spieth bounced back from his disaster at 12 to birdie 13 and 15 and nearly birdie 16; that goes a long way to start forming scar tissue, particularly in someone who has won multiple majors already. Spieth also