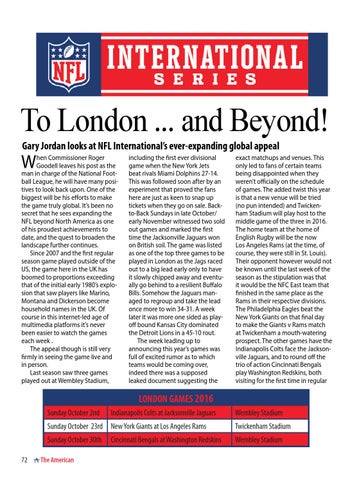 To London ... and Beyond! Gary Jordan looks at NFL International’s ever-expanding global appeal

hen Commissioner Roger Goodell leaves his post as the man in charge of the National Football League, he will have many positives to look back upon. One of the biggest will be his efforts to make the game truly global. It’s been no secret that he sees expanding the NFL beyond North America as one of his proudest achievements to date, and the quest to broaden the landscape further continues. Since 2007 and the first regular season game played outside of the US, the game here in the UK has boomed to proportions exceeding that of the initial early 1980’s explosion that saw players like Marino, Montana and Dickerson become household names in the UK. Of course in this internet-led age of multimedia platforms it’s never been easier to watch the games each week . The appeal though is still very firmly in seeing the game live and in person. Last season saw three games played out at Wembley Stadium,

including the first ever divisional game when the New York Jets beat rivals Miami Dolphins 27-14. This was followed soon after by an experiment that proved the fans here are just as keen to snap up tickets when they go on sale. Backto-Back Sundays in late October/ early November witnessed two sold out games and marked the first time the Jacksonville Jaguars won on British soil. The game was listed as one of the top three games to be played in London as the Jags raced out to a big lead early only to have it slowly chipped away and eventually go behind to a resilient Buffalo Bills. Somehow the Jaguars managed to regroup and take the lead once more to win 34-31. A week later it was more one sided as playoff bound Kansas City dominated the Detroit Lions in a 45-10 rout. The week leading up to announcing this year’s games was full of excited rumor as to which teams would be coming over, indeed there was a supposed leaked document suggesting the

exact matchups and venues. This only led to fans of certain teams being disappointed when they weren’t officially on the schedule of games. The added twist this year is that a new venue will be tried (no pun intended) and Twickenham Stadium will play host to the middle game of the three in 2016. The home team at the home of English Rugby will be the now Los Angeles Rams (at the time, of course, they were still in St. Louis). Their opponent however would not be known until the last week of the season as the stipulation was that it would be the NFC East team that finished in the same place as the Rams in their respective divisions. The Philadelphia Eagles beat the New York Giants on that final day to make the Giants v Rams match at Twickenham a mouth-watering prospect. The other games have the Indianapolis Colts face the Jacksonville Jaguars, and to round off the trio of action Cincinnati Bengals play Washington Redskins, both visiting for the first time in regular