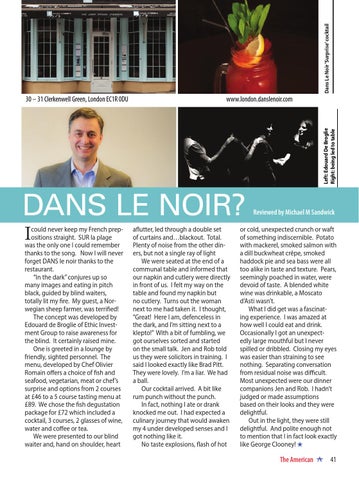 could never keep my French prepositions straight. SUR la plage was the only one I could remember thanks to the song. Now I will never forget DANS le noir thanks to the restaurant. “In the dark” conjures up so many images and eating in pitch black, guided by blind waiters, totally lit my fire. My guest, a Norwegian sheep farmer, was terrified! The concept was developed by Edouard de Broglie of Ethic Investment Group to raise awareness for the blind. It certainly raised mine. One is greeted in a lounge by friendly, sighted personnel. The menu, developed by Chef Olivier Romain offers a choice of fish and seafood, vegetarian, meat or chef’s surprise and options from 2 courses at £46 to a 5 course tasting menu at £89. We chose the fish degustation package for £72 which included a cocktail, 3 courses, 2 glasses of wine, water and coffee or tea. We were presented to our blind waiter and, hand on shoulder, heart

aflutter, led through a double set of curtains and…blackout. Total. Plenty of noise from the other diners, but not a single ray of light We were seated at the end of a communal table and informed that our napkin and cutlery were directly in front of us. I felt my way on the table and found my napkin but no cutlery. Turns out the woman next to me had taken it. I thought, “Great! Here I am, defenceless in the dark, and I’m sitting next to a klepto!” With a bit of fumbling, we got ourselves sorted and started on the small talk. Jen and Rob told us they were solicitors in training. I said I looked exactly like Brad Pitt. They were lovely. I’m a liar. We had a ball. Our cocktail arrived. A bit like rum punch without the punch. In fact, nothing I ate or drank knocked me out. I had expected a culinary journey that would awaken my 4 under developed senses and I got nothing like it. No taste explosions, flash of hot

or cold, unexpected crunch or waft of something indiscernible. Potato with mackerel, smoked salmon with a dill buckwheat crêpe, smoked haddock pie and sea bass were all too alike in taste and texture. Pears, seemingly poached in water, were devoid of taste. A blended white wine was drinkable, a Moscato d’Asti wasn’t. What I did get was a fascinating experience. I was amazed at how well I could eat and drink. Occasionally I got an unexpectedly large mouthful but I never spilled or dribbled. Closing my eyes was easier than straining to see nothing. Separating conversation from residual noise was difficult. Most unexpected were our dinner companions Jen and Rob. I hadn’t judged or made assumptions based on their looks and they were delightful. Out in the light, they were still delightful. And polite enough not to mention that I in fact look exactly like George Clooney!