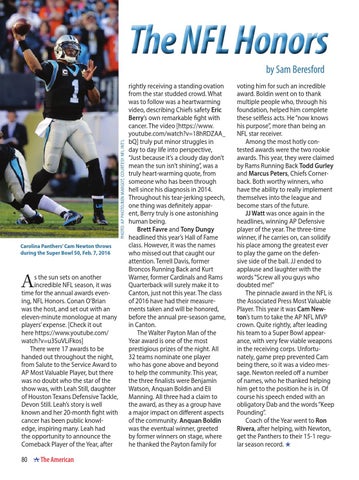 s the sun sets on another incredible NFL season, it was time for the annual awards evening, NFL Honors. Conan O’Brian was the host, and set out with an eleven-minute monologue at many players’ expense. [Check it out here https://www.youtube.com/ watch?v=u3SuVLiFkos] There were 17 awards to be handed out throughout the night, from Salute to the Service Award to AP Most Valuable Player, but there was no doubt who the star of the show was, with Leah Still, daughter of Houston Texans Defensive Tackle, Devon Still. Leah’s story is well known and her 20-month fight with cancer has been public knowledge, inspiring many. Leah had the opportunity to announce the Comeback Player of the Year, after

rightly receiving a standing ovation from the star studded crowd. What was to follow was a heartwarming video, describing Chiefs safety Eric Berry’s own remarkable fight with cancer. The video [https://www. youtube.com/watch?v=18hRDZAA_ bQ] truly put minor struggles in day to day life into perspective, “Just because it’s a cloudy day don’t mean the sun isn’t shining”, was a truly heart-warming quote, from someone who has been through hell since his diagnosis in 2014. Throughout his tear-jerking speech, one thing was definitely apparent, Berry truly is one astonishing human being. Brett Favre and Tony Dungy headlined this year’s Hall of Fame class. However, it was the names who missed out that caught our attention. Terrell Davis, former Broncos Running Back and Kurt Warner, former Cardinals and Rams Quarterback will surely make it to Canton, just not this year. The class of 2016 have had their measurements taken and will be honored, before the annual pre-season game, in Canton. The Walter Payton Man of the Year award is one of the most prestigious prizes of the night. All 32 teams nominate one player who has gone above and beyond to help the community. This year, the three finalists were Benjamin Watson, Anquan Boldin and Eli Manning. All three had a claim to the award, as they as a group have a major impact on different aspects of the community. Anquan Boldin was the eventual winner, greeted by former winners on stage, where he thanked the Payton family for

voting him for such an incredible award. Boldin went on to thank multiple people who, through his foundation, helped him complete these selfless acts. He “now knows his purpose”, more than being an NFL star receiver. Among the most hotly contested awards were the two rookie awards. This year, they were claimed by Rams Running Back Todd Gurley and Marcus Peters, Chiefs Cornerback. Both worthy winners, who have the ability to really implement themselves into the league and become stars of the future. JJ Watt was once again in the headlines, winning AP Defensive player of the year. The three-time winner, if he carries on, can solidify his place among the greatest ever to play the game on the defensive side of the ball. JJ ended to applause and laughter with the words “Screw all you guys who doubted me!” The pinnacle award in the NFL is the Associated Press Most Valuable Player. This year it was Cam Newton’s turn to take the AP NFL MVP crown. Quite rightly, after leading his team to a Super Bowl appearance, with very few viable weapons in the receiving corps. Unfortunately, game prep prevented Cam being there, so it was a video message. Newton reeled off a number of names, who he thanked helping him get to the position he is in. Of course his speech ended with an obligatory Dab and the words “Keep Pounding”. Coach of the Year went to Ron Rivera, after helping, with Newton, get the Panthers to their 15-1 regular season record.