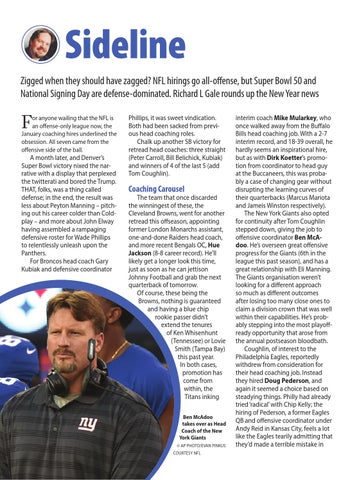 Zigged when they should have zagged? NFL hirings go all-offense, but Super Bowl 50 and National Signing Day are defense-dominated. Richard L Gale rounds up the New Year news

or anyone wailing that the NFL is an offense-only league now, the January coaching hires underlined the obsession. All seven came from the offensive side of the ball.

A month later, and Denver’s Super Bowl victory nixed the narrative with a display that perplexed the twitterati and bored the Trump. THAT, folks, was a thing called defense; in the end, the result was less about Peyton Manning – pitching out his career colder than Coldplay – and more about John Elway having assembled a rampaging defensive roster for Wade Phillips to relentlessly unleash upon the Panthers. For Broncos head coach Gary Kubiak and defensive coordinator

Phillips, it was sweet vindication. Both had been sacked from previous head coaching roles. Chalk up another SB victory for retread head coaches: three straight (Peter Carroll, Bill Belichick, Kubiak) and winners of 4 of the last 5 (add Tom Coughlin).

The team that once discarded the winningest of these, the Cleveland Browns, went for another retread this offseason, appointing former London Monarchs assistant, one-and-done Raiders head coach, and more recent Bengals OC, Hue Jackson (8-8 career record). He’ll likely get a longer look this time, just as soon as he can jettison Johnny Football and grab the next quarterback of tomorrow. Of course, these being the Browns, nothing is guaranteed and having a blue chip rookie passer didn’t extend the tenures of Ken Whisenhunt (Tennessee) or Lovie Smith (Tampa Bay) this past year. In both cases, promotion has come from within, the Titans inking Ben McAdoo takes over as Head Coach of the New York Giants © AP PHOTO/EVAN PINKUS COURTESY NFL

interim coach Mike Mularkey, who once walked away from the Buffalo Bills head coaching job. With a 2-7 interim record, and 18-39 overall, he hardly seems an inspirational hire, but as with Dirk Koetter’s promotion from coordinator to head guy at the Buccaneers, this was probably a case of changing gear without disrupting the learning curves of their quarterbacks (Marcus Mariota and Jameis Winston respectively). The New York Giants also opted for continuity after Tom Coughlin stepped down, giving the job to offensive coordinator Ben McAdoo. He’s overseen great offensive progress for the Giants (6th in the league this past season), and has a great relationship with Eli Manning. The Giants organisation weren’t looking for a different approach so much as different outcomes after losing too many close ones to claim a division crown that was well within their capabilities. He’s probably stepping into the most playoffready opportunity that arose from the annual postseason bloodbath. Coughlin, of interest to the Philadelphia Eagles, reportedly withdrew from consideration for their head coaching job. Instead they hired Doug Pederson, and again it seemed a choice based on steadying things. Philly had already tried ‘radical’ with Chip Kelly; the hiring of Pederson, a former Eagles QB and offensive coordinator under Andy Reid in Kansas City, feels a lot like the Eagles tearily admitting that they’d made a terrible mistake in