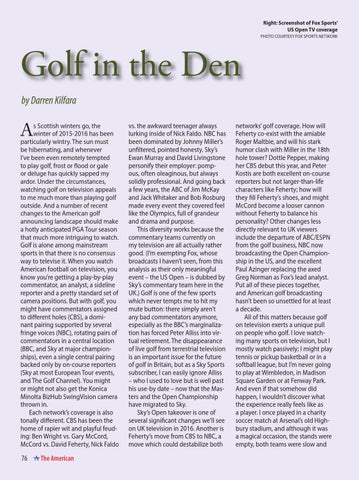 Golf in the Den by Darren Kilfara

s Scottish winters go, the winter of 2015-2016 has been particularly wintry. The sun must be hibernating, and whenever I’ve been even remotely tempted to play golf, frost or flood or gale or deluge has quickly sapped my ardor. Under the circumstances, watching golf on television appeals to me much more than playing golf outside. And a number of recent changes to the American golf announcing landscape should make a hotly anticipated PGA Tour season that much more intriguing to watch. Golf is alone among mainstream sports in that there is no consensus way to televise it. When you watch American football on television, you know you’re getting a play-by-play commentator, an analyst, a sideline reporter and a pretty standard set of camera positions. But with golf, you might have commentators assigned to different holes (CBS), a dominant pairing supported by several fringe voices (NBC), rotating pairs of commentators in a central location (BBC, and Sky at major championships), even a single central pairing backed only by on-course reporters (Sky at most European Tour events, and The Golf Channel). You might or might not also get the Konica Minolta BizHub SwingVision camera thrown in. Each network’s coverage is also tonally different. CBS has been the home of rapier wit and playful feuding: Ben Wright vs. Gary McCord, McCord vs. David Feherty, Nick Faldo

vs. the awkward teenager always lurking inside of Nick Faldo. NBC has been dominated by Johnny Miller’s unfiltered, pointed honesty. Sky’s Ewan Murray and David Livingstone personify their employer: pompous, often oleaginous, but always solidly professional. And going back a few years, the ABC of Jim McKay and Jack Whitaker and Bob Rosburg made every event they covered feel like the Olympics, full of grandeur and drama and purpose. This diversity works because the commentary teams currently on my television are all actually rather good. (I’m exempting Fox, whose broadcasts I haven’t seen, from this analysis as their only meaningful event – the US Open – is dubbed by Sky’s commentary team here in the UK.) Golf is one of the few sports which never tempts me to hit my mute button: there simply aren’t any bad commentators anymore, especially as the BBC’s marginalization has forced Peter Alliss into virtual retirement. The disappearance of live golf from terrestrial television is an important issue for the future of golf in Britain, but as a Sky Sports subscriber, I can easily ignore Alliss – who I used to love but is well past his use-by date – now that the Masters and the Open Championship have migrated to Sky. Sky’s Open takeover is one of several significant changes we’ll see on UK television in 2016. Another is Feherty’s move from CBS to NBC, a move which could destabilize both

networks’ golf coverage. How will Feherty co-exist with the amiable Roger Maltbie, and will his stark humor clash with Miller in the 18th hole tower? Dottie Pepper, making her CBS debut this year, and Peter Kostis are both excellent on-course reporters but not larger-than-life characters like Feherty; how will they fill Feherty’s shoes, and might McCord become a looser cannon without Feherty to balance his personality? Other changes less directly relevant to UK viewers include the departure of ABC/ESPN from the golf business, NBC now broadcasting the Open Championship in the US, and the excellent Paul Azinger replacing the axed Greg Norman as Fox’s lead analyst. Put all of these pieces together, and American golf broadcasting hasn’t been so unsettled for at least a decade. All of this matters because golf on television exerts a unique pull on people who golf. I love watching many sports on television, but I mostly watch passively; I might play tennis or pickup basketball or in a softball league, but I’m never going to play at Wimbledon, in Madison Square Garden or at Fenway Park. And even if that somehow did happen, I wouldn’t discover what the experience really feels like as a player. I once played in a charity soccer match at Arsenal’s old Highbury stadium, and although it was a magical occasion, the stands were empty, both teams were slow and