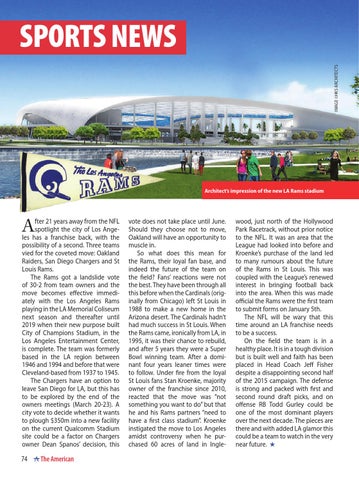 fter 21 years away from the NFL spotlight the city of Los Angeles has a franchise back, with the possibility of a second. Three teams vied for the coveted move: Oakland Raiders, San Diego Chargers and St Louis Rams. The Rams got a landslide vote of 30-2 from team owners and the move becomes effective immediately with the Los Angeles Rams playing in the LA Memorial Coliseum next season and thereafter until 2019 when their new purpose built City of Champions Stadium, in the Los Angeles Entertainment Center, is complete. The team was formerly based in the LA region between 1946 and 1994 and before that were Cleveland-based from 1937 to 1945. The Chargers have an option to leave San Diego for LA, but this has to be explored by the end of the owners meetings (March 20-23). A city vote to decide whether it wants to plough $350m into a new facility on the current Qualcomm Stadium site could be a factor on Chargers owner Dean Spanos’ decision, this

vote does not take place until June. Should they choose not to move, Oakland will have an opportunity to muscle in. So what does this mean for the Rams, their loyal fan base, and indeed the future of the team on the field? Fans’ reactions were not the best. They have been through all this before when the Cardinals (originally from Chicago) left St Louis in 1988 to make a new home in the Arizona desert. The Cardinals hadn’t had much success in St Louis. When the Rams came, ironically from LA, in 1995, it was their chance to rebuild, and after 5 years they were a Super Bowl winning team. After a dominant four years leaner times were to follow. Under fire from the loyal St Louis fans Stan Kroenke, majority owner of the franchise since 2010, reacted that the move was “not something you want to do” but that he and his Rams partners “need to have a first class stadium”. Kroenke instigated the move to Los Angeles amidst controversy when he purchased 60 acres of land in Ingle-

wood, just north of the Hollywood Park Racetrack, without prior notice to the NFL. It was an area that the League had looked into before and Kroenke’s purchase of the land led to many rumours about the future of the Rams in St Louis. This was coupled with the League’s renewed interest in bringing football back into the area. When this was made official the Rams were the first team to submit forms on January 5th. The NFL will be wary that this time around an LA franchise needs to be a success. On the field the team is in a healthy place. It is in a tough division but is built well and faith has been placed in Head Coach Jeff Fisher despite a disappointing second half of the 2015 campaign. The defense is strong and packed with first and second round draft picks, and on offense RB Todd Gurley could be one of the most dominant players over the next decade. The pieces are there and with added LA glamor this could be a team to watch in the very near future.