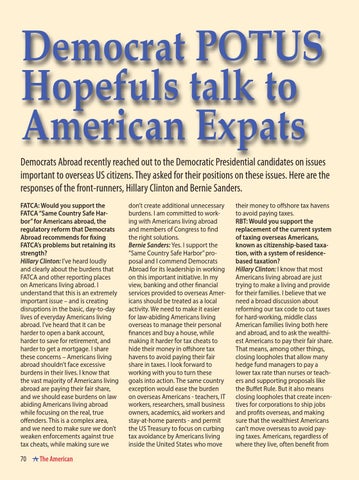 Democrat POTUS Hopefuls talk to American Expats Democrats Abroad recently reached out to the Democratic Presidential candidates on issues important to overseas US citizens. They asked for their positions on these issues. Here are the responses of the front-runners, Hillary Clinton and Bernie Sanders. FATCA: Would you support the FATCA “Same Country Safe Harbor” for Americans abroad, the regulatory reform that Democrats Abroad recommends for fixing FATCA’s problems but retaining its strength? Hillary Clinton: I’ve heard loudly and clearly about the burdens that FATCA and other reporting places on Americans living abroad. I understand that this is an extremely important issue – and is creating disruptions in the basic, day-to-day lives of everyday Americans living abroad. I’ve heard that it can be harder to open a bank account, harder to save for retirement, and harder to get a mortgage. I share these concerns – Americans living abroad shouldn’t face excessive burdens in their lives. I know that the vast majority of Americans living abroad are paying their fair share, and we should ease burdens on law abiding Americans living abroad while focusing on the real, true offenders. This is a complex area, and we need to make sure we don’t weaken enforcements against true tax cheats, while making sure we

don’t create additional unnecessary burdens. I am committed to working with Americans living abroad and members of Congress to find the right solutions. Bernie Sanders: Yes. I support the “Same Country Safe Harbor” proposal and I commend Democrats Abroad for its leadership in working on this important initiative. In my view, banking and other financial services provided to overseas Americans should be treated as a local activity. We need to make it easier for law-abiding Americans living overseas to manage their personal finances and buy a house, while making it harder for tax cheats to hide their money in offshore tax havens to avoid paying their fair share in taxes. I look forward to working with you to turn these goals into action. The same country exception would ease the burden on overseas Americans - teachers, IT workers, researchers, small business owners, academics, aid workers and stay-at-home parents - and permit the US Treasury to focus on curbing tax avoidance by Americans living inside the United States who move

their money to offshore tax havens to avoid paying taxes. RBT: Would you support the replacement of the current system of taxing overseas Americans, known as citizenship-based taxation, with a system of residencebased taxation? Hillary Clinton: I know that most Americans living abroad are just trying to make a living and provide for their families. I believe that we need a broad discussion about reforming our tax code to cut taxes for hard-working, middle class American families living both here and abroad, and to ask the wealthiest Americans to pay their fair share. That means, among other things, closing loopholes that allow many hedge fund managers to pay a lower tax rate than nurses or teachers and supporting proposals like the Buffet Rule. But it also means closing loopholes that create incentives for corporations to ship jobs and profits overseas, and making sure that the wealthiest Americans can’t move overseas to avoid paying taxes. Americans, regardless of where they live, often benefit from