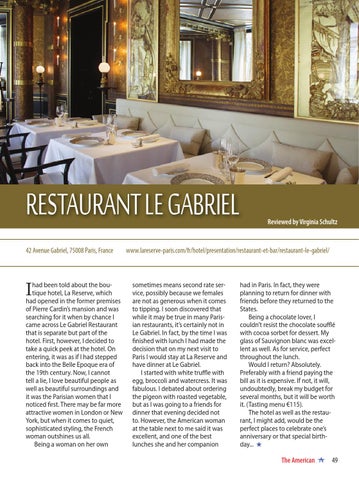 had been told about the boutique hotel, La Reserve, which had opened in the former premises of Pierre Cardin’s mansion and was searching for it when by chance I came across Le Gabriel Restaurant that is separate but part of the hotel. First, however, I decided to take a quick peek at the hotel. On entering, it was as if I had stepped back into the Belle Epoque era of the 19th century. Now, I cannot tell a lie, I love beautiful people as well as beautiful surroundings and it was the Parisian women that I noticed first. There may be far more attractive women in London or New York, but when it comes to quiet, sophisticated styling, the French woman outshines us all. Being a woman on her own

sometimes means second rate service, possibly because we females are not as generous when it comes to tipping. I soon discovered that while it may be true in many Parisian restaurants, it’s certainly not in Le Gabriel. In fact, by the time I was finished with lunch I had made the decision that on my next visit to Paris I would stay at La Reserve and have dinner at Le Gabriel. I started with white truffle with egg, broccoli and watercress. It was fabulous. I debated about ordering the pigeon with roasted vegetable, but as I was going to a friends for dinner that evening decided not to. However, the American woman at the table next to me said it was excellent, and one of the best lunches she and her companion

had in Paris. In fact, they were planning to return for dinner with friends before they returned to the States. Being a chocolate lover, I couldn’t resist the chocolate soufflé with cocoa sorbet for dessert. My glass of Sauvignon blanc was excellent as well. As for service, perfect throughout the lunch. Would I return? Absolutely. Preferably with a friend paying the bill as it is expensive. If not, it will, undoubtedly, break my budget for several months, but it will be worth it. (Tasting menu €115). The hotel as well as the restaurant, I might add, would be the perfect places to celebrate one’s anniversary or that special birthday...