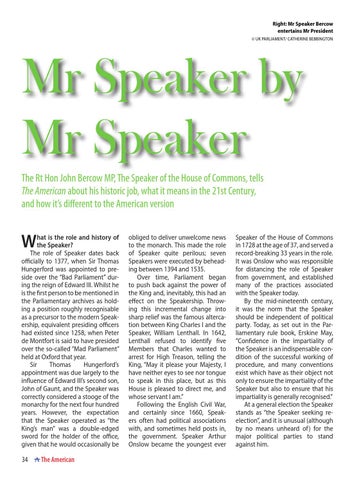 Mr Speaker by Mr Speaker The Rt Hon John Bercow MP, The Speaker of the House of Commons, tells The American about his historic job, what it means in the 21st Century, and how it’s different to the American version

hat is the role and history of the Speaker? The role of Speaker dates back officially to 1377, when Sir Thomas Hungerford was appointed to preside over the “Bad Parliament” during the reign of Edward III. Whilst he is the first person to be mentioned in the Parliamentary archives as holding a position roughly recognisable as a precursor to the modern Speakership, equivalent presiding officers had existed since 1258, when Peter de Montfort is said to have presided over the so-called “Mad Parliament” held at Oxford that year. Sir Thomas Hungerford’s appointment was due largely to the influence of Edward III’s second son, John of Gaunt, and the Speaker was correctly considered a stooge of the monarchy for the next four hundred years. However, the expectation that the Speaker operated as “the King’s man” was a double-edged sword for the holder of the office, given that he would occasionally be

obliged to deliver unwelcome news to the monarch. This made the role of Speaker quite perilous; seven Speakers were executed by beheading between 1394 and 1535. Over time, Parliament began to push back against the power of the King and, inevitably, this had an effect on the Speakership. Throwing this incremental change into sharp relief was the famous altercation between King Charles I and the Speaker, William Lenthall. In 1642, Lenthall refused to identify five Members that Charles wanted to arrest for High Treason, telling the King, “May it please your Majesty, I have neither eyes to see nor tongue to speak in this place, but as this House is pleased to direct me, and whose servant I am.” Following the English Civil War, and certainly since 1660, Speakers often had political associations with, and sometimes held posts in, the government. Speaker Arthur Onslow became the youngest ever

Speaker of the House of Commons in 1728 at the age of 37, and served a record-breaking 33 years in the role. It was Onslow who was responsible for distancing the role of Speaker from government, and established many of the practices associated with the Speaker today. By the mid-nineteenth century, it was the norm that the Speaker should be independent of political party. Today, as set out in the Parliamentary rule book, Erskine May, “Confidence in the impartiality of the Speaker is an indispensable condition of the successful working of procedure, and many conventions exist which have as their object not only to ensure the impartiality of the Speaker but also to ensure that his impartiality is generally recognised.” At a general election the Speaker stands as “the Speaker seeking reelection”, and it is unusual (although by no means unheard of) for the major political parties to stand against him.