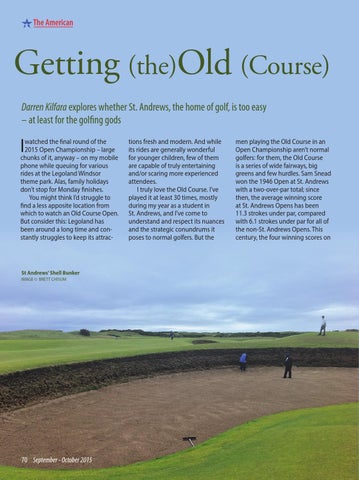 Getting (the)Old (Course) Darren Kilfara explores whether St. Andrews, the home of golf, is too easy – at least for the golfing gods

watched the final round of the 2015 Open Championship – large chunks of it, anyway – on my mobile phone while queuing for various rides at the Legoland Windsor theme park. Alas, family holidays don’t stop for Monday finishes. You might think I’d struggle to find a less apposite location from which to watch an Old Course Open. But consider this: Legoland has been around a long time and constantly struggles to keep its attrac-

tions fresh and modern. And while its rides are generally wonderful for younger children, few of them are capable of truly entertaining and/or scaring more experienced attendees. I truly love the Old Course. I’ve played it at least 30 times, mostly during my year as a student in St. Andrews, and I’ve come to understand and respect its nuances and the strategic conundrums it poses to normal golfers. But the

men playing the Old Course in an Open Championship aren’t normal golfers: for them, the Old Course is a series of wide fairways, big greens and few hurdles. Sam Snead won the 1946 Open at St. Andrews with a two-over-par total; since then, the average winning score at St. Andrews Opens has been 11.3 strokes under par, compared with 6.1 strokes under par for all of the non-St. Andrews Opens. This century, the four winning scores on