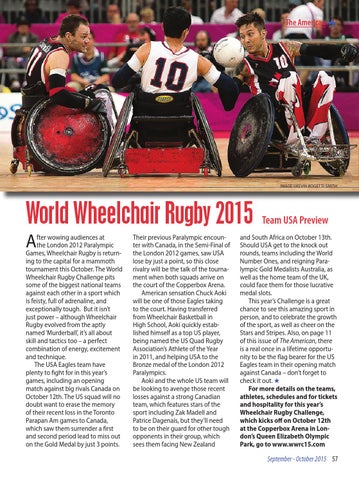 fter wowing audiences at the London 2012 Paralympic Games, Wheelchair Rugby is returning to the capital for a mammoth tournament this October. The World Wheelchair Rugby Challenge pits some of the biggest national teams against each other in a sport which is feisty, full of adrenaline, and exceptionally tough. But it isn’t just power – although Wheelchair Rugby evolved from the aptly named ‘Murderball’, it’s all about skill and tactics too – a perfect combination of energy, excitement and technique. The USA Eagles team have plenty to fight for in this year’s games, including an opening match against big rivals Canada on October 12th. The US squad will no doubt want to erase the memory of their recent loss in the Toronto Parapan Am games to Canada, which saw them surrender a first and second period lead to miss out on the Gold Medal by just 3 points.

Their previous Paralympic encounter with Canada, in the Semi-Final of the London 2012 games, saw USA lose by just a point, so this close rivalry will be the talk of the tournament when both squads arrive on the court of the Copperbox Arena. American sensation Chuck Aoki will be one of those Eagles taking to the court. Having transferred from Wheelchair Basketball in High School, Aoki quickly established himself as a top US player, being named the US Quad Rugby Association’s Athlete of the Year in 2011, and helping USA to the Bronze medal of the London 2012 Paralympics. Aoki and the whole US team will be looking to avenge those recent losses against a strong Canadian team, which features stars of the sport including Zak Madell and Patrice Dagenais, but they’ll need to be on their guard for other tough opponents in their group, which sees them facing New Zealand

and South Africa on October 13th. Should USA get to the knock out rounds, teams including the World Number Ones, and reigning Paralympic Gold Medalists Australia, as well as the home team of the UK, could face them for those lucrative medal slots. This year’s Challenge is a great chance to see this amazing sport in person, and to celebrate the growth of the sport, as well as cheer on the Stars and Stripes. Also, on page 11 of this issue of The American, there is a real once in a lifetime opportunity to be the flag bearer for the US Eagles team in their opening match against Canada – don’t forget to check it out. For more details on the teams, athletes, schedules and for tickets and hospitality for this year’s Wheelchair Rugby Challenge, which kicks off on October 12th at the Copperbox Arena in London’s Queen Elizabeth Olympic Park, go to www.wwrc15.com