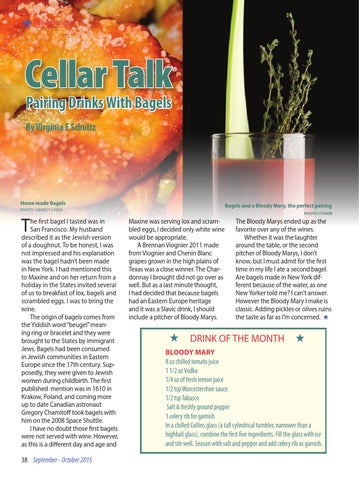 Bagels and a Bloody Mary, the perfect pairing

he first bagel I tasted was in San Francisco. My husband described it as the Jewish version of a doughnut. To be honest, I was not impressed and his explanation was the bagel hadn’t been made in New York. I had mentioned this to Maxine and on her return from a holiday in the States invited several of us to breakfast of lox, bagels and scrambled eggs. I was to bring the wine. The origin of bagels comes from the Yiddish word “beugel” meaning ring or bracelet and they were brought to the States by immigrant Jews. Bagels had been consumed in Jewish communities in Eastern Europe since the 17th century. Supposedly, they were given to Jewish women during childbirth. The first published mention was in 1610 in Krakow, Poland, and coming more up to date Canadian astronaut Gregory Chamitoff took bagels with him on the 2008 Space Shuttle. I have no doubt those first bagels were not served with wine. However, as this is a different day and age and

Maxine was serving lox and scrambled eggs, I decided only white wine would be appropriate. A Brennan Viognier 2011 made from Viognier and Chenin Blanc grapes grown in the high plains of Texas was a close winner. The Chardonnay I brought did not go over as well. But as a last minute thought, I had decided that because bagels had an Eastern Europe heritage and it was a Slavic drink, I should include a pitcher of Bloody Marys.

The Bloody Marys ended up as the favorite over any of the wines. Whether it was the laughter around the table, or the second pitcher of Bloody Marys, I don’t know, but I must admit for the first time in my life I ate a second bagel. Are bagels made in New York different because of the water, as one New Yorker told me? I can’t answer. However the Bloody Mary I make is classic. Adding pickles or olives ruins the taste as far as I’m concerned.