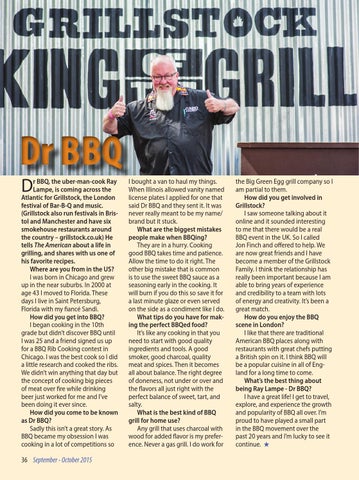 r BBQ, the uber-man-cook Ray Lampe, is coming across the Atlantic for Grillstock, the London festival of Bar-B-Q and music. (Grillstock also run festivals in Bristol and Manchester and have six smokehouse restaurants around the country – grillstock.co.uk) He tells The American about a life in grilling, and shares with us one of his favorite recipes. Where are you from in the US? I was born in Chicago and grew up in the near suburbs. In 2000 at age 43 I moved to Florida. These days I live in Saint Petersburg, Florida with my fiancé Sandi. How did you get into BBQ? I began cooking in the 10th grade but didn’t discover BBQ until I was 25 and a friend signed us up for a BBQ Rib Cooking contest in Chicago. I was the best cook so I did a little research and cooked the ribs. We didn’t win anything that day but the concept of cooking big pieces of meat over fire while drinking beer just worked for me and I’ve been doing it ever since. How did you come to be known as Dr BBQ? Sadly this isn’t a great story. As BBQ became my obsession I was cooking in a lot of competitions so

I bought a van to haul my things. When Illinois allowed vanity named license plates I applied for one that said Dr BBQ and they sent it. It was never really meant to be my name/ brand but it stuck. What are the biggest mistakes people make when BBQing? They are in a hurry. Cooking good BBQ takes time and patience. Allow the time to do it right. The other big mistake that is common is to use the sweet BBQ sauce as a seasoning early in the cooking. It will burn if you do this so save it for a last minute glaze or even served on the side as a condiment like I do. What tips do you have for making the perfect BBQed food? It’s like any cooking in that you need to start with good quality ingredients and tools. A good smoker, good charcoal, quality meat and spices. Then it becomes all about balance. The right degree of doneness, not under or over and the flavors all just right with the perfect balance of sweet, tart, and salty. What is the best kind of BBQ grill for home use? Any grill that uses charcoal with wood for added flavor is my preference. Never a gas grill. I do work for

the Big Green Egg grill company so I am partial to them. How did you get involved in Grillstock? I saw someone talking about it online and it sounded interesting to me that there would be a real BBQ event in the UK. So I called Jon Finch and offered to help. We are now great friends and I have become a member of the Grillstock Family. I think the relationship has really been important because I am able to bring years of experience and credibility to a team with lots of energy and creativity. It’s been a great match. How do you enjoy the BBQ scene in London? I like that there are traditional American BBQ places along with restaurants with great chefs putting a British spin on it. I think BBQ will be a popular cuisine in all of England for a long time to come. What’s the best thing about being Ray Lampe - Dr BBQ? I have a great life! I get to travel, explore, and experience the growth and popularity of BBQ all over. I’m proud to have played a small part in the BBQ movement over the past 20 years and I’m lucky to see it continue.