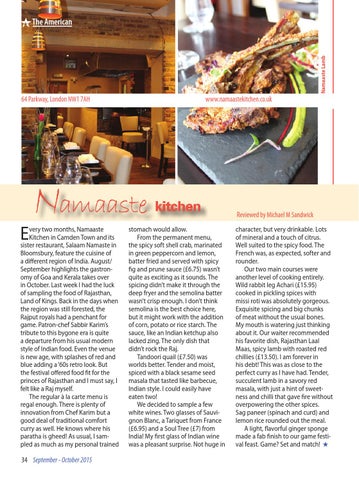 The The American American

very two months, Namaaste Kitchen in Camden Town and its sister restaurant, Salaam Namaste in Bloomsbury, feature the cuisine of a different region of India. August/ September highlights the gastronomy of Goa and Kerala takes over in October. Last week I had the luck of sampling the food of Rajasthan, Land of Kings. Back in the days when the region was still forested, the Rajput royals had a penchant for game. Patron-chef Sabbir Karim’s tribute to this bygone era is quite a departure from his usual modern style of Indian food. Even the venue is new age, with splashes of red and blue adding a ‘60s retro look. But the festival offered food fit for the princes of Rajasthan and I must say, I felt like a Raj myself. The regular à la carte menu is regal enough. There is plenty of innovation from Chef Karim but a good deal of traditional comfort curry as well. He knows where his paratha is gheed! As usual, I sampled as much as my personal trained

stomach would allow. From the permanent menu, the spicy soft shell crab, marinated in green peppercorn and lemon, batter fried and served with spicy fig and prune sauce (£6.75) wasn’t quite as exciting as it sounds. The spicing didn’t make it through the deep fryer and the semolina batter wasn’t crisp enough. I don’t think semolina is the best choice here, but it might work with the addition of corn, potato or rice starch. The sauce, like an Indian ketchup also lacked zing. The only dish that didn’t rock the Raj. Tandoori quail (£7.50) was worlds better. Tender and moist, spiced with a black sesame seed masala that tasted like barbecue, Indian style. I could easily have eaten two! We decided to sample a few white wines. Two glasses of Sauvignon Blanc, a Tariquet from France (£6.95) and a Soul Tree (£7) from India! My first glass of Indian wine was a pleasant surprise. Not huge in

Reviewed by Michael M Sandwick character, but very drinkable. Lots of mineral and a touch of citrus. Well suited to the spicy food. The French was, as expected, softer and rounder. Our two main courses were another level of cooking entirely. Wild rabbit leg Achari (£15.95) cooked in pickling spices with missi roti was absolutely gorgeous. Exquisite spicing and big chunks of meat without the usual bones. My mouth is watering just thinking about it. Our waiter recommended his favorite dish, Rajasthan Laal Maas, spicy lamb with roasted red chillies (£13.50). I am forever in his debt! This was as close to the perfect curry as I have had. Tender, succulent lamb in a savory red masala, with just a hint of sweetness and chilli that gave fire without overpowering the other spices. Sag paneer (spinach and curd) and lemon rice rounded out the meal. A light, flavorful ginger sponge made a fab finish to our game festival feast. Game? Set and match!