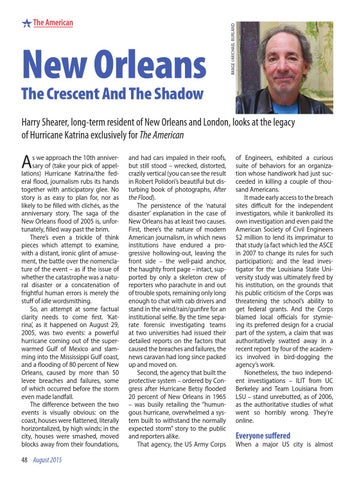 The Crescent And The Shadow

Harry Shearer, long-term resident of New Orleans and London, looks at the legacy of Hurricane Katrina exclusively for The American

s we approach the 10th anniversary of (take your pick of appellations) Hurricane Katrina/the federal flood, journalism rubs its hands together with anticipatory glee. No story is as easy to plan for, nor as likely to be filled with clichés, as the anniversary story. The saga of the New Orleans flood of 2005 is, unfortunately, filled way past the brim. There’s even a trickle of think pieces which attempt to examine, with a distant, ironic glint of amusement, the battle over the nomenclature of the event – as if the issue of whether the catastrophe was a natural disaster or a concatenation of frightful human errors is merely the stuff of idle wordsmithing. So, an attempt at some factual clarity needs to come first. ‘Katrina’, as it happened on August 29, 2005, was two events: a powerful hurricane coming out of the superwarmed Gulf of Mexico and slamming into the Mississippi Gulf coast, and a flooding of 80 percent of New Orleans, caused by more than 50 levee breaches and failures, some of which occurred before the storm even made landfall. The difference between the two events is visually obvious: on the coast, houses were flattened, literally horizontalized, by high winds; in the city, houses were smashed, moved blocks away from their foundations,

and had cars impaled in their roofs, but still stood – wrecked, distorted, crazily vertical (you can see the result in Robert Polidori’s beautiful but disturbing book of photographs, After the Flood). The persistence of the ‘natural disaster’ explanation in the case of New Orleans has at least two causes. First, there’s the nature of modern American journalism, in which news institutions have endured a progressive hollowing-out, leaving the front side – the well-paid anchor, the haughty front page – intact, supported by only a skeleton crew of reporters who parachute in and out of trouble spots, remaining only long enough to chat with cab drivers and stand in the wind/rain/gunfire for an institutional selfie. By the time separate forensic investigating teams at two universities had issued their detailed reports on the factors that caused the breaches and failures, the news caravan had long since packed up and moved on. Second, the agency that built the protective system – ordered by Congress after Hurricane Betsy flooded 20 percent of New Orleans in 1965 – was busily retailing the “humungous hurricane, overwhelmed a system built to withstand the normally expected storm” story to the public and reporters alike. That agency, the US Army Corps

of Engineers, exhibited a curious suite of behaviors for an organization whose handiwork had just succeeded in killing a couple of thousand Americans. It made early access to the breach sites difficult for the independent investigators, while it bankrolled its own investigation and even paid the American Society of Civil Engineers $2 million to lend its imprimatur to that study (a fact which led the ASCE in 2007 to change its rules for such participation); and the lead investigator for the Louisiana State University study was ultimately fired by his institution, on the grounds that his public criticism of the Corps was threatening the school’s ability to get federal grants. And the Corps blamed local officials for stymieing its preferred design for a crucial part of the system, a claim that was authoritatively swatted away in a recent report by four of the academics involved in bird-dogging the agency’s work. Nonetheless, the two independent investigations – ILIT from UC Berkeley and Team Louisiana from LSU – stand unrebutted, as of 2006, as the authoritative studies of what went so horribly wrong. They’re online.

When a major US city is almost