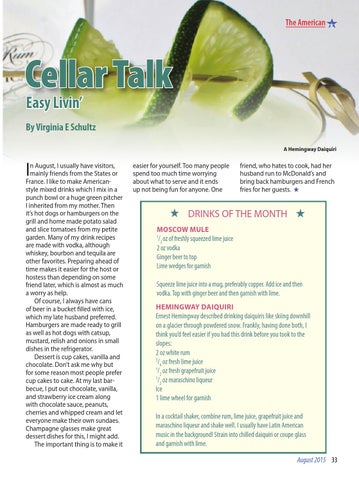 n August, I usually have visitors, mainly friends from the States or France. I like to make Americanstyle mixed drinks which I mix in a punch bowl or a huge green pitcher I inherited from my mother. Then it’s hot dogs or hamburgers on the grill and home made potato salad and slice tomatoes from my petite garden. Many of my drink recipes are made with vodka, although whiskey, bourbon and tequila are other favorites. Preparing ahead of time makes it easier for the host or hostess than depending on some friend later, which is almost as much a worry as help. Of course, I always have cans of beer in a bucket filled with ice, which my late husband preferred. Hamburgers are made ready to grill as well as hot dogs with catsup, mustard, relish and onions in small dishes in the refrigerator. Dessert is cup cakes, vanilla and chocolate. Don’t ask me why but for some reason most people prefer cup cakes to cake. At my last barbecue, I put out chocolate, vanilla, and strawberry ice cream along with chocolate sauce, peanuts, cherries and whipped cream and let everyone make their own sundaes. Champagne glasses make great dessert dishes for this, I might add. The important thing is to make it

easier for yourself. Too many people spend too much time worrying about what to serve and it ends up not being fun for anyone. One

friend, who hates to cook, had her husband run to McDonald’s and bring back hamburgers and French fries for her guests.

Squeeze lime juice into a mug, preferably copper. Add ice and then vodka. Top with ginger beer and then garnish with lime. HEMINGWAY DAIQUIRI Ernest Hemingway described drinking daiquiris like skiing downhill on a glacier through powdered snow. Frankly, having done both, I think you’d feel easier if you had this drink before you took to the slopes: 2 oz white rum 3 /4 oz fresh lime juice 1 /2 oz fresh grapefruit juice 1 /2 oz maraschino liqueur Ice 1 lime wheel for garnish In a cocktail shaker, combine rum, lime juice, grapefruit juice and maraschino liqueur and shake well. I usually have Latin American music in the background! Strain into chilled daiquiri or coupe glass and garnish with lime. August 2015 33