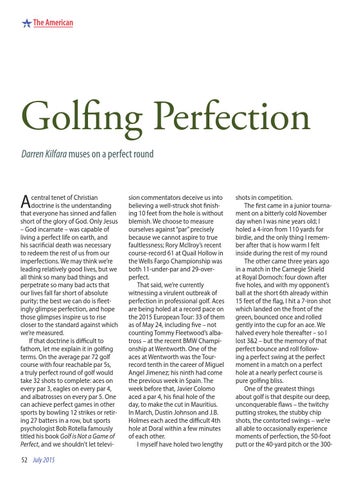 Golfing Perfection Darren Kilfara muses on a perfect round

central tenet of Christian doctrine is the understanding that everyone has sinned and fallen short of the glory of God. Only Jesus – God incarnate – was capable of living a perfect life on earth, and his sacrificial death was necessary to redeem the rest of us from our imperfections. We may think we’re leading relatively good lives, but we all think so many bad things and perpetrate so many bad acts that our lives fall far short of absolute purity; the best we can do is fleetingly glimpse perfection, and hope those glimpses inspire us to rise closer to the standard against which we’re measured. If that doctrine is difficult to fathom, let me explain it in golfing terms. On the average par 72 golf course with four reachable par 5s, a truly perfect round of golf would take 32 shots to complete: aces on every par 3, eagles on every par 4, and albatrosses on every par 5. One can achieve perfect games in other sports by bowling 12 strikes or retiring 27 batters in a row, but sports psychologist Bob Rotella famously titled his book Golf is Not a Game of Perfect, and we shouldn’t let televi-

sion commentators deceive us into believing a well-struck shot finishing 10 feet from the hole is without blemish. We choose to measure ourselves against “par” precisely because we cannot aspire to true faultlessness; Rory McIlroy’s recent course-record 61 at Quail Hollow in the Wells Fargo Championship was both 11-under-par and 29-overperfect. That said, we’re currently witnessing a virulent outbreak of perfection in professional golf. Aces are being holed at a record pace on the 2015 European Tour: 33 of them as of May 24, including five – not counting Tommy Fleetwood’s albatross – at the recent BMW Championship at Wentworth. One of the aces at Wentworth was the Tourrecord tenth in the career of Miguel Angel Jimenez; his ninth had come the previous week in Spain. The week before that, Javier Colomo aced a par 4, his final hole of the day, to make the cut in Mauritius. In March, Dustin Johnson and J.B. Holmes each aced the difficult 4th hole at Doral within a few minutes of each other. I myself have holed two lengthy

shots in competition. The first came in a junior tournament on a bitterly cold November day when I was nine years old; I holed a 4-iron from 110 yards for birdie, and the only thing I remember after that is how warm I felt inside during the rest of my round The other came three years ago in a match in the Carnegie Shield at Royal Dornoch: four down after five holes, and with my opponent’s ball at the short 6th already within 15 feet of the flag, I hit a 7-iron shot which landed on the front of the green, bounced once and rolled gently into the cup for an ace. We halved every hole thereafter – so I lost 3&2 – but the memory of that perfect bounce and roll following a perfect swing at the perfect moment in a match on a perfect hole at a nearly perfect course is pure golfing bliss. One of the greatest things about golf is that despite our deep, unconquerable flaws – the twitchy putting strokes, the stubby chip shots, the contorted swings – we’re all able to occasionally experience moments of perfection, the 50-foot putt or the 40-yard pitch or the 300-