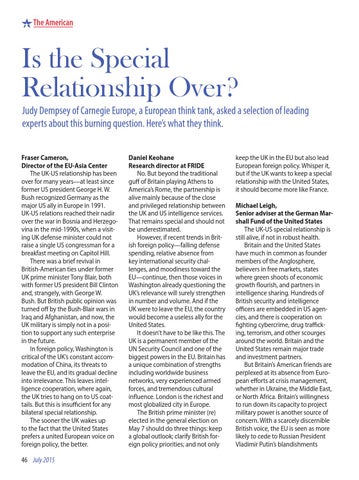 Is the Special Relationship Over?

Judy Dempsey of Carnegie Europe, a European think tank, asked a selection of leading experts about this burning question. Here’s what they think.

Fraser Cameron, Director of the EU-Asia Center The UK-US relationship has been over for many years—at least since former US president George H. W. Bush recognized Germany as the major US ally in Europe in 1991. UK-US relations reached their nadir over the war in Bosnia and Herzegovina in the mid-1990s, when a visiting UK defense minister could not raise a single US congressman for a breakfast meeting on Capitol Hill. There was a brief revival in British-American ties under former UK prime minister Tony Blair, both with former US president Bill Clinton and, strangely, with George W. Bush. But British public opinion was turned off by the Bush-Blair wars in Iraq and Afghanistan, and now, the UK military is simply not in a position to support any such enterprise in the future. In foreign policy, Washington is critical of the UK’s constant accommodation of China, its threats to leave the EU, and its gradual decline into irrelevance. This leaves intelligence cooperation, where again, the UK tries to hang on to US coattails. But this is insufficient for any bilateral special relationship. The sooner the UK wakes up to the fact that the United States prefers a united European voice on foreign policy, the better.

Daniel Keohane Research director at FRIDE No. But beyond the traditional guff of Britain playing Athens to America’s Rome, the partnership is alive mainly because of the close and privileged relationship between the UK and US intelligence services. That remains special and should not be underestimated. However, if recent trends in British foreign policy—falling defense spending, relative absence from key international security challenges, and moodiness toward the EU—continue, then those voices in Washington already questioning the UK’s relevance will surely strengthen in number and volume. And if the UK were to leave the EU, the country would become a useless ally for the United States. It doesn’t have to be like this. The UK is a permanent member of the UN Security Council and one of the biggest powers in the EU. Britain has a unique combination of strengths including worldwide business networks, very experienced armed forces, and tremendous cultural influence. London is the richest and most globalized city in Europe. The British prime minister (re) elected in the general election on May 7 should do three things: keep a global outlook; clarify British foreign policy priorities; and not only

keep the UK in the EU but also lead European foreign policy. Whisper it, but if the UK wants to keep a special relationship with the United States, it should become more like France. Michael Leigh, Senior adviser at the German Marshall Fund of the United States The UK-US special relationship is still alive, if not in robust health. Britain and the United States have much in common as founder members of the Anglosphere, believers in free markets, states where green shoots of economic growth flourish, and partners in intelligence sharing. Hundreds of British security and intelligence officers are embedded in US agencies, and there is cooperation on fighting cybercrime, drug trafficking, terrorism, and other scourges around the world. Britain and the United States remain major trade and investment partners. But Britain’s American friends are perplexed at its absence from European efforts at crisis management, whether in Ukraine, the Middle East, or North Africa. Britain’s willingness to run down its capacity to project military power is another source of concern. With a scarcely discernible British voice, the EU is seen as more likely to cede to Russian President Vladimir Putin’s blandishments