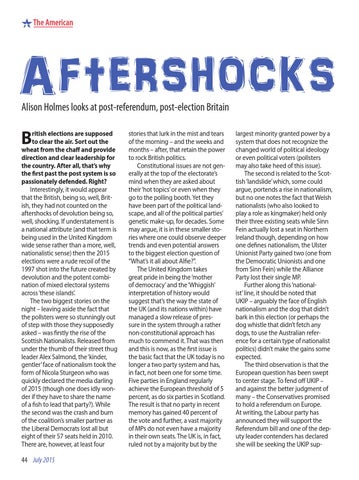 ritish elections are supposed to clear the air. Sort out the wheat from the chaff and provide direction and clear leadership for the country. After all, that’s why the first past the post system is so passionately defended. Right? Interestingly, it would appear that the British, being so, well, British, they had not counted on the aftershocks of devolution being so, well, shocking. If understatement is a national attribute (and that term is being used in the United Kingdom wide sense rather than a more, well, nationalistic sense) then the 2015 elections were a rude recoil of the 1997 shot into the future created by devolution and the potent combination of mixed electoral systems across ‘these islands’. The two biggest stories on the night – leaving aside the fact that the pollsters were so stunningly out of step with those they supposedly asked – was firstly the rise of the Scottish Nationalists. Released from under the thumb of their street thug leader Alex Salmond, the ‘kinder, gentler’ face of nationalism took the form of Nicola Sturgeon who was quickly declared the media darling of 2015 (though one does idly wonder if they have to share the name of a fish to lead that party?). While the second was the crash and burn of the coalition’s smaller partner as the Liberal Democrats lost all but eight of their 57 seats held in 2010. There are, however, at least four

stories that lurk in the mist and tears of the morning – and the weeks and months – after, that retain the power to rock British politics. Constitutional issues are not generally at the top of the electorate’s mind when they are asked about their ‘hot topics’ or even when they go to the polling booth. Yet they have been part of the political landscape, and all of the political parties’ genetic make-up, for decades. Some may argue, it is in these smaller stories where one could observe deeper trends and even potential answers to the biggest election question of “What’s it all about Alfie?”. The United Kingdom takes great pride in being the ‘mother of democracy’ and the ‘Whiggish’ interpretation of history would suggest that’s the way the state of the UK (and its nations within) have managed a slow release of pressure in the system through a rather non-constitutional approach has much to commend it. That was then and this is now, as the first issue is the basic fact that the UK today is no longer a two party system and has, in fact, not been one for some time. Five parties in England regularly achieve the European threshold of 5 percent, as do six parties in Scotland. The result is that no party in recent memory has gained 40 percent of the vote and further, a vast majority of MPs do not even have a majority in their own seats. The UK is, in fact, ruled not by a majority but by the

largest minority granted power by a system that does not recognize the changed world of political ideology or even political voters (pollsters may also take heed of this issue). The second is related to the Scottish ‘landslide’ which, some could argue, portends a rise in nationalism, but no one notes the fact that Welsh nationalists (who also looked to play a role as kingmaker) held only their three existing seats while Sinn Fein actually lost a seat in Northern Ireland though, depending on how one defines nationalism, the Ulster Unionist Party gained two (one from the Democratic Unionists and one from Sinn Fein) while the Alliance Party lost their single MP. Further along this ‘nationalist’ line, it should be noted that UKIP – arguably the face of English nationalism and the dog that didn’t bark in this election (or perhaps the dog whistle that didn’t fetch any dogs, to use the Australian reference for a certain type of nationalist politics) didn’t make the gains some expected. The third observation is that the European question has been swept to center stage. To fend off UKIP – and against the better judgment of many – the Conservatives promised to hold a referendum on Europe. At writing, the Labour party has announced they will support the Referendum bill and one of the deputy leader contenders has declared she will be seeking the UKIP sup-