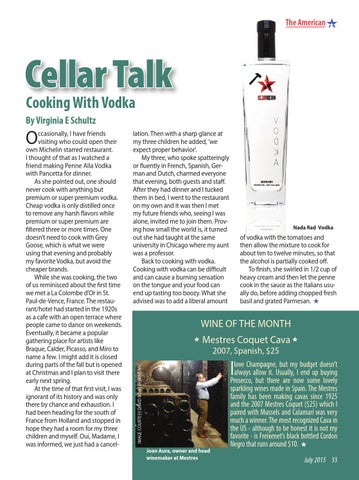 By Virginia E Schultz ccasionally, I have friends visiting who could open their own Michelin starred restaurant. I thought of that as I watched a friend making Penne Alla Vodka with Pancetta for dinner. As she pointed out, one should never cook with anything but premium or super premium vodka. Cheap vodka is only distilled once to remove any harsh flavors while premium or super premium are filtered three or more times. One doesn’t need to cook with Grey Goose, which is what we were using that evening and probably my favorite Vodka, but avoid the cheaper brands. While she was cooking, the two of us reminisced about the first time we met a La Colombe d’Or in St. Paul-de-Vence, France. The restaurant/hotel had started in the 1920s as a cafe with an open terrace where people came to dance on weekends. Eventually, it became a popular gathering place for artists like Braque, Calder, Picasso, and Miro to name a few. I might add it is closed during parts of the fall but is opened at Christmas and I plan to visit there early next spring. At the time of that first visit, I was ignorant of its history and was only there by chance and exhaustion. I had been heading for the south of France from Holland and stopped in hope they had a room for my three children and myself. Oui, Madame, I was informed, we just had a cancel-

lation. Then with a sharp glance at my three children he added, 'we expect proper behavior'. My three, who spoke spatteringly or fluently in French, Spanish, German and Dutch, charmed everyone that evening, both guests and staff. After they had dinner and I tucked them in bed, I went to the restaurant on my own and it was then I met my future friends who, seeing I was alone, invited me to join them. Proving how small the world is, it turned out she had taught at the same university in Chicago where my aunt was a professor. Back to cooking with vodka. Cooking with vodka can be difficult and can cause a burning sensation on the tongue and your food can end up tasting too boozy. What she advised was to add a liberal amount

of vodka with the tomatoes and then allow the mixture to cook for about ten to twelve minutes, so that the alcohol is partially cooked off. To finish, she swirled in 1/2 cup of heavy cream and then let the penne cook in the sauce as the Italians usually do, before adding chopped fresh basil and grated Parmesan.

love Champagne, but my budget doesn’t IProsecco, always allow it. Usually, I end up buying but there are now some lovely

sparkling wines made in Spain. The Mestres family has been making cavas since 1925 and the 2007 Mestres Coquet ($25) which I paired with Mussels and Calamari was very much a winner. The most recognized Cava in the US - although to be honest it is not my favorite - is Freixenet’s black bottled Cordon Negro that runs around $10. July 2015 33