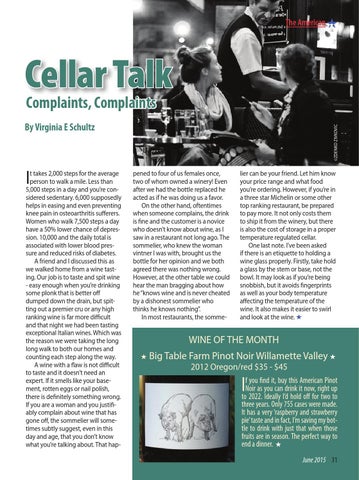 t takes 2,000 steps for the average person to walk a mile. Less than 5,000 steps in a day and you’re considered sedentary. 6,000 supposedly helps in easing and even preventing knee pain in osteoarthritis sufferers. Women who walk 7,500 steps a day have a 50% lower chance of depression. 10,000 and the daily total is associated with lower blood pressure and reduced risks of diabetes. A friend and I discussed this as we walked home from a wine tasting. Our job is to taste and spit wine - easy enough when you’re drinking some plonk that is better off dumped down the drain, but spitting out a premier cru or any high ranking wine is far more difficult and that night we had been tasting exceptional Italian wines. Which was the reason we were taking the long long walk to both our homes and counting each step along the way. A wine with a flaw is not difficult to taste and it doesn’t need an expert. If it smells like your basement, rotten eggs or nail polish, there is definitely something wrong. If you are a woman and you justifiably complain about wine that has gone off, the sommelier will sometimes subtly suggest, even in this day and age, that you don’t know what you’re talking about. That hap-

pened to four of us females once, two of whom owned a winery! Even after we had the bottle replaced he acted as if he was doing us a favor. On the other hand, oftentimes when someone complains, the drink is fine and the customer is a novice who doesn’t know about wine, as I saw in a restaurant not long ago. The sommelier, who knew the woman vintner I was with, brought us the bottle for her opinion and we both agreed there was nothing wrong. However, at the other table we could hear the man bragging about how he “knows wine and is never cheated by a dishonest sommelier who thinks he knows nothing”. In most restaurants, the somme-

lier can be your friend. Let him know your price range and what food you’re ordering. However, if you’re in a three star Michelin or some other top ranking restaurant, be prepared to pay more. It not only costs them to ship it from the winery, but there is also the cost of storage in a proper temperature regulated cellar. One last note. I’ve been asked if there is an etiquette to holding a wine glass properly. Firstly, take hold a glass by the stem or base, not the bowl. It may look as if you’re being snobbish, but it avoids fingerprints as well as your body temperature affecting the temperature of the wine. It also makes it easier to swirl and look at the wine.

you find it, buy this American Pinot ItofNoir2022. as you can drink it now, right up Ideally I’d hold off for two to

three years. Only 755 cases were made. It has a very ‘raspberry and strawberry pie’ taste and in fact, I’m saving my bottle to drink with just that when those fruits are in season. The perfect way to end a dinner. June 2015 31