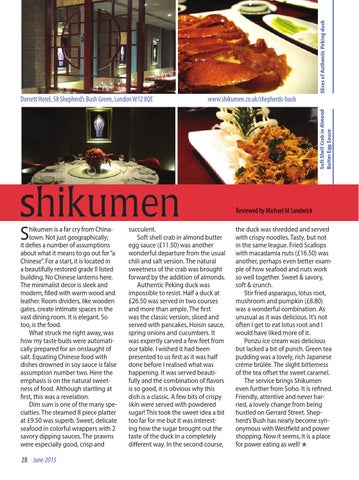 hikumen is a far cry from Chinatown. Not just geographically; it defies a number of assumptions about what it means to go out for “a Chinese”. For a start, it is located in a beautifully restored grade II listed building. No Chinese lanterns here. The minimalist decor is sleek and modern, filled with warm wood and leather. Room dividers, like wooden gates, create intimate spaces in the vast dining room. It is elegant. So too, is the food. What struck me right away, was how my taste buds were automatically prepared for an onslaught of salt. Equating Chinese food with dishes drowned in soy sauce is false assumption number two. Here the emphasis is on the natural sweetness of food. Although startling at first, this was a revelation. Dim sum is one of the many specialties. The steamed 8 piece platter at £9.50 was superb. Sweet, delicate seafood in colorful wrappers with 2 savory dipping sauces. The prawns were especially good, crisp and

succulent. Soft shell crab in almond butter egg sauce (£11.50) was another wonderful departure from the usual chili and salt version. The natural sweetness of the crab was brought forward by the addition of almonds. Authentic Peking duck was impossible to resist. Half a duck at £26.50 was served in two courses and more than ample. The first was the classic version, sliced and served with pancakes, Hoisin sauce, spring onions and cucumbers. It was expertly carved a few feet from our table. I wished it had been presented to us first as it was half done before I realised what was happening. It was served beautifully and the combination of flavors is so good, it is obvious why this dish is a classic. A few bits of crispy skin were served with powdered sugar! This took the sweet idea a bit too far for me but it was interesting how the sugar brought out the taste of the duck in a completely different way. In the second course,

Reviewed by Michael M Sandwick the duck was shredded and served with crispy noodles. Tasty, but not in the same league. Fried Scallops with macadamia nuts (£16.50) was another, perhaps even better example of how seafood and nuts work so well together. Sweet & savory, soft & crunch. Stir fried asparagus, lotus root, mushroom and pumpkin (£8.80) was a wonderful combination. As unusual as it was delicious. It’s not often I get to eat lotus root and I would have liked more of it. Ponzu ice cream was delicious but lacked a bit of punch. Green tea pudding was a lovely, rich Japanese crème brûlée. The slight bitterness of the tea offset the sweet caramel. The service brings Shikumen even further from Soho. It is refined. Friendly, attentive and never harried, a lovely change from being hustled on Gerrard Street. Shepherd’s Bush has nearly become synonymous with Westfield and power shopping. Now it seems, it is a place for power eating as well!