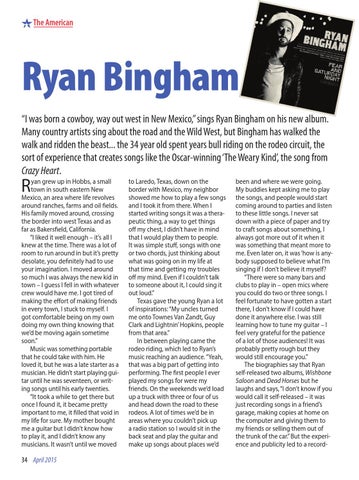 Ryan Bingham “I was born a cowboy, way out west in New Mexico,” sings Ryan Bingham on his new album. Many country artists sing about the road and the Wild West, but Bingham has walked the walk and ridden the beast... the 34 year old spent years bull riding on the rodeo circuit, the sort of experience that creates songs like the Oscar-winning ‘The Weary Kind’, the song from Crazy Heart.

yan grew up in Hobbs, a small town in south eastern New Mexico, an area where life revolves around ranches, farms and oil fields. His family moved around, crossing the border into west Texas and as far as Bakersfield, California. “I liked it well enough – it’s all I knew at the time. There was a lot of room to run around in but it’s pretty desolate, you definitely had to use your imagination. I moved around so much I was always the new kid in town – I guess I fell in with whatever crew would have me. I got tired of making the effort of making friends in every town, I stuck to myself. I got comfortable being on my own doing my own thing knowing that we’d be moving again sometime soon.” Music was something portable that he could take with him. He loved it, but he was a late starter as a musician. He didn’t start playing guitar until he was seventeen, or writing songs until his early twenties. “It took a while to get there but once I found it, it became pretty important to me, it filled that void in my life for sure. My mother bought me a guitar but I didn’t know how to play it, and I didn’t know any musicians. It wasn’t until we moved

to Laredo, Texas, down on the border with Mexico, my neighbor showed me how to play a few songs and I took it from there. When I started writing songs it was a therapeutic thing, a way to get things off my chest, I didn’t have in mind that I would play them to people. It was simple stuff, songs with one or two chords, just thinking about what was going on in my life at that time and getting my troubles off my mind. Even if I couldn’t talk to someone about it, I could sing it out loud.” Texas gave the young Ryan a lot of inspirations: “My uncles turned me onto Townes Van Zandt, Guy Clark and Lightnin’ Hopkins, people from that area.” In between playing came the rodeo riding, which led to Ryan’s music reaching an audience. “Yeah, that was a big part of getting into performing. The first people I ever played my songs for were my friends. On the weekends we’d load up a truck with three or four of us and head down the road to these rodeos. A lot of times we’d be in areas where you couldn’t pick up a radio station so I would sit in the back seat and play the guitar and make up songs about places we’d

been and where we were going. My buddies kept asking me to play the songs, and people would start coming around to parties and listen to these little songs. I never sat down with a piece of paper and try to craft songs about something, I always got more out of it when it was something that meant more to me. Even later on, it was ‘how is anybody supposed to believe what I’m singing if I don’t believe it myself? “There were so many bars and clubs to play in – open mics where you could do two or three songs. I feel fortunate to have gotten a start there, I don’t know if I could have done it anywhere else. I was still learning how to tune my guitar – I feel very grateful for the patience of a lot of those audiences! It was probably pretty rough but they would still encourage you.” The biographies say that Ryan self-released two albums, Wishbone Saloon and Dead Horses but he laughs and says, “I don’t know if you would call it self-released – it was just recording songs in a friend’s garage, making copies at home on the computer and giving them to my friends or selling them out of the trunk of the car.” But the experience and publicity led to a record-