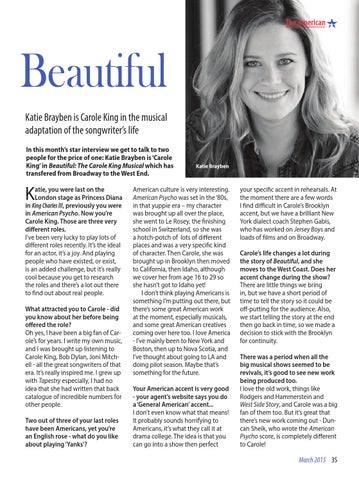 Beautiful Katie Brayben is Carole King in the musical adaptation of the songwriter’s life In this month’s star interview we get to talk to two people for the price of one: Katie Brayben is ‘Carole King’ in Beautiful: The Carole King Musical which has transfered from Broadway to the West End.

atie, you were last on the London stage as Princess Diana in King Charles III, previously you were in American Psycho. Now you’re Carole King. Those are three very different roles. I’ve been very lucky to play lots of different roles recently. It’s the ideal for an actor, it’s a joy. And playing people who have existed, or exist, is an added challenge, but it’s really cool because you get to research the roles and there’s a lot out there to find out about real people. What attracted you to Carole - did you know about her before being offered the role? Oh yes, I have been a big fan of Carole’s for years. I write my own music, and I was brought up listening to Carole King, Bob Dylan, Joni Mitchell - all the great songwriters of that era. It’s really inspired me. I grew up with Tapestry especially, I had no idea that she had written that back catalogue of incredible numbers for other people. Two out of three of your last roles have been Americans, yet you’re an English rose - what do you like about playing ‘Yanks’?

American culture is very interesting. American Psycho was set in the ‘80s, in that yuppie era – my character was brought up all over the place, she went to Le Rosey, the finishing school in Switzerland, so she was a hotch-potch of lots of different places and was a very specific kind of character. Then Carole, she was brought up in Brooklyn then moved to California, then Idaho, although we cover her from age 16 to 29 so she hasn’t got to Idaho yet! I don’t think playing Americans is something I’m putting out there, but there’s some great American work at the moment, especially musicals, and some great American creatives coming over here too. I love America - I’ve mainly been to New York and Boston, then up to Nova Scotia, and I’ve thought about going to LA and doing pilot season. Maybe that’s something for the future. Your American accent is very good - your agent’s website says you do a ‘General American’ accent... I don’t even know what that means! It probably sounds horrifying to Americans, it’s what they call it at drama college. The idea is that you can go into a show then perfect

your specific accent in rehearsals. At the moment there are a few words I find difficult in Carole’s Brooklyn accent, but we have a brilliant New York dialect coach Stephen Gabis, who has worked on Jersey Boys and loads of films and on Broadway. Carole’s life changes a lot during the story of Beautiful, and she moves to the West Coast. Does her accent change during the show? There are little things we bring in, but we have a short period of time to tell the story so it could be off-putting for the audience. Also, we start telling the story at the end then go back in time, so we made a decision to stick with the Brooklyn for continuity. There was a period when all the big musical shows seemed to be revivals, it’s good to see new work being produced too. I love the old work, things like Rodgers and Hammerstein and West Side Story, and Carole was a big fan of them too. But it’s great that there’s new work coming out - Duncan Sheik, who wrote the American Psycho score, is completely different to Carole!