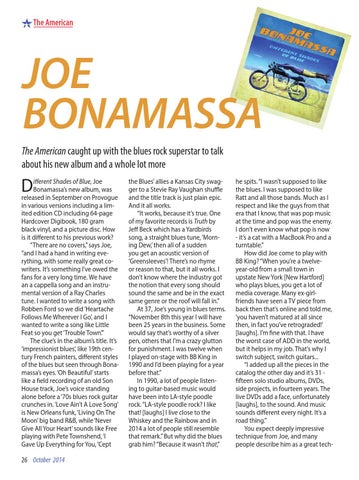 ifferent Shades of Blue, Joe Bonamassa’s new album, was released in September on Provogue in various versions including a limited edition CD including 64-page Hardcover Digibook, 180 gram black vinyl, and a picture disc. How is it different to his previous work? “There are no covers,” says Joe, “and I had a hand in writing everything, with some really great cowriters. It’s something I’ve owed the fans for a very long time. We have an a cappella song and an instrumental version of a Ray Charles tune. I wanted to write a song with Robben Ford so we did ‘Heartache Follows Me Wherever I Go’, and I wanted to write a song like Little Feat so you get ‘Trouble Town’.” The clue’s in the album’s title. It’s ‘impressionist blues’, like 19th century French painters, different styles of the blues but seen through Bonamassa’s eyes. ‘Oh Beautiful’ starts like a field recording of an old Son House track, Joe’s voice standing alone before a ‘70s blues rock guitar crunches in. ‘Love Ain’t A Love Song’ is New Orleans funk, ‘Living On The Moon’ big band R&B, while ‘Never Give All Your Heart’ sounds like Free playing with Pete Townshend, ‘I Gave Up Everything for You, ‘Cept

the Blues’ allies a Kansas City swagger to a Stevie Ray Vaughan shuffle and the title track is just plain epic. And it all works. “It works, because it’s true. One of my favorite records is Truth by Jeff Beck which has a Yardbirds song, a straight blues tune, ‘Morning Dew,’ then all of a sudden you get an acoustic version of ‘Greensleeves’! There’s no rhyme or reason to that, but it all works. I don’t know where the industry got the notion that every song should sound the same and be in the exact same genre or the roof will fall in.” At 37, Joe’s young in blues terms. “November 8th this year I will have been 25 years in the business. Some would say that’s worthy of a silver pen, others that I’m a crazy glutton for punishment. I was twelve when I played on-stage with BB King in 1990 and I’d been playing for a year before that.” In 1990, a lot of people listening to guitar-based music would have been into LA-style poodle rock. “LA-style poodle rock? I like that! [laughs] I live close to the Whiskey and the Rainbow and in 2014 a lot of people still resemble that remark.” But why did the blues grab him? “Because it wasn’t that,”

he spits. “I wasn’t supposed to like the blues. I was supposed to like Ratt and all those bands. Much as I respect and like the guys from that era that I know, that was pop music at the time and pop was the enemy. I don’t even know what pop is now - it’s a cat with a MacBook Pro and a turntable.” How did Joe come to play with BB King? “When you’re a twelveyear-old from a small town in upstate New York [New Hartford] who plays blues, you get a lot of media coverage. Many ex-girlfriends have seen a TV piece from back then that’s online and told me, ‘you haven’t matured at all since then, in fact you’ve retrograded!’ [laughs]. I’m fine with that. I have the worst case of ADD in the world, but it helps in my job. That’s why I switch subject, switch guitars... “I added up all the pieces in the catalog the other day and it’s 31 fifteen solo studio albums, DVDs, side projects, in fourteen years. The live DVDs add a face, unfortunately [laughs], to the sound. And music sounds different every night. It’s a road thing.” You expect deeply impressive technique from Joe, and many people describe him as a great tech-