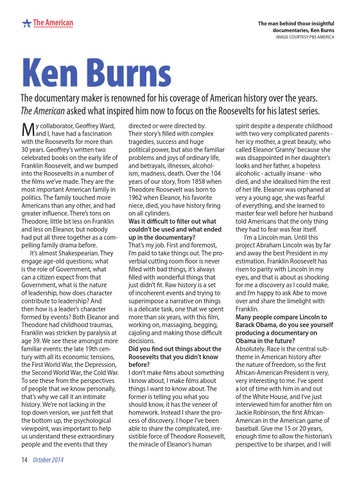 The documentary maker is renowned for his coverage of American history over the years. The American asked what inspired him now to focus on the Roosevelts for his latest series.

y collaborator, Geoffrey Ward, and I, have had a fascination with the Roosevelts for more than 30 years. Geoffrey’s written two celebrated books on the early life of Franklin Roosevelt, and we bumped into the Roosevelts in a number of the films we’ve made. They are the most important American family in politics. The family touched more Americans than any other, and had greater influence. There’s tons on Theodore, little bit less on Franklin and less on Eleanor, but nobody had put all three together as a compelling family drama before. It’s almost Shakespearian. They engage age-old questions; what is the role of Government, what can a citizen expect from that Government, what is the nature of leadership, how does character contribute to leadership? And then how is a leader’s character formed by events? Both Eleanor and Theodore had childhood traumas, Franklin was stricken by paralysis at age 39. We see these amongst more familiar events: the late 19th century with all its economic tensions, the First World War, the Depression, the Second World War, the Cold War. To see these from the perspectives of people that we know personally, that’s why we call it an intimate history. We’re not lacking in the top down version, we just felt that the bottom up, the psychological viewpoint, was important to help us understand these extraordinary people and the events that they

directed or were directed by. Their story’s filled with complex tragedies, success and huge political power, but also the familiar problems and joys of ordinary life, and betrayals, illnesses, alcoholism, madness, death. Over the 104 years of our story, from 1858 when Theodore Roosevelt was born to 1962 when Eleanor, his favorite niece, died, you have history firing on all cylinders. Was it difficult to filter out what couldn’t be used and what ended up in the documentary? That’s my job. First and foremost, I’m paid to take things out. The proverbial cutting room floor is never filled with bad things, it’s always filled with wonderful things that just didn’t fit. Raw history is a set of incoherent events and trying to superimpose a narrative on things is a delicate task, one that we spent more than six years, with this film, working on, massaging, begging, cajoling and making those difficult decisions. Did you find out things about the Roosevelts that you didn’t know before? I don’t make films about something I know about, I make films about things I want to know about. The former is telling you what you should know, it has the veneer of homework. Instead I share the process of discovery. I hope I’ve been able to share the complicated, irresistible force of Theodore Roosevelt, the miracle of Eleanor’s human

spirit despite a desperate childhood with two very complicated parents her icy mother, a great beauty, who called Eleanor ‘Granny’ because she was disappointed in her daughter’s looks and her father, a hopeless alcoholic - actually insane - who died, and she idealised him the rest of her life. Eleanor was orphaned at very a young age, she was fearful of everything, and she learned to master fear well before her husband told Americans that the only thing they had to fear was fear itself. I’m a Lincoln man. Until this project Abraham Lincoln was by far and away the best President in my estimation. Franklin Roosevelt has risen to parity with Lincoln in my eyes, and that is about as shocking for me a discovery as I could make, and I’m happy to ask Abe to move over and share the limelight with Franklin. Many people compare Lincoln to Barack Obama, do you see yourself producing a documentary on Obama in the future? Absolutely. Race is the central subtheme in American history after the nature of freedom, so the first African-American President is very, very interesting to me. I’ve spent a lot of time with him in and out of the White House, and I’ve just interviewed him for another film on Jackie Robinson, the first AfricanAmerican in the American game of baseball. Give me 15 or 20 years, enough time to allow the historian’s perspective to be sharper, and I will